Filling jars and other containers 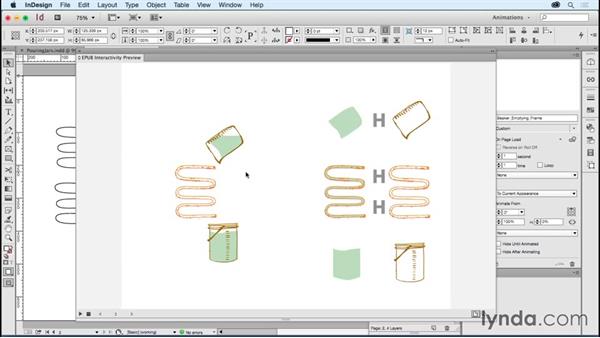 Join Diane Burns for an in-depth discussion in this video Filling jars and other containers, part of InDesign: Creating Animations.

- One of the fun effects you can create with InDesign animation is that of filling jars and emptying containers. Let's take a look at our little chemistry lab example here. I'll show it to you in the preview panel. The beaker empties, goes through the tube and fills up the jar. Fun, huh? Let me show you how this is done. There's a fair amount of trickery involved here. I'm gonna turn to the second page of this file and I'll get out of preview mode and what I've set up here is on the left I have our three objects that I'm gonna animate, the beaker emptying, the tube filling and then emptying and the jar on the left.

And then over here on the right is a little diagram of how each of these is constructed. I'm gonna start with the jar because that's the simplest one. The jar is constructed of two pieces, the fill and the empty jar on top of that. If we look at the layers panel, we'll see that here's the contents and then here's the empty jar that sits on top of it. In this case, we're going to simply select the contents and use our scaling trick to make it fill up. We'll keep at 100 and we'll have the height change from zero to 100% to the current appearance and we'll set the orientation at the bottom.

Again, this is the reverse of how the animation occurs, but I wanted to start with the simplest part first. So let's preview that, and there goes our jar filling up. Very simple. The beaker, on the other hand, is a little bit different. Not only do we want the beaker to empty, but we actually have the beaker at an angle and it's constructed of the fill, a hiding box, that's what the H stands for, and an empty beaker on top. If we look at it in the layers panel, we have the contents, on top of that is this frame and on top of that is the empty beaker.

Now, if we try to scale the contents, because it's at an angle, what we want is for it to come down from this corner, but we want it to go straight across because it's emptying. That's gravity. So instead, we're going to scale this hiding frame, or the frame that makes it look like it's going empty and that frame is underneath the outline of the beaker but on top of the contents. So again, we're gonna use a little scaling trick. We're going to leave this frame at a width of 100 and we'll have it scale to zero, so we'll set it "To Current Appearance" and this time we'll put the proxy at the top.

Let's take a look. There it goes and it looks pretty natural. So, we need a little extra piece in here to hide the content and make it look like it's emptying. Now, the beaker is really interesting because in the case of the beaker we need it to fill up as it's pouring down to the jar and then we need it to empty. So in this case, we have two hiding objects. We certainly can't just scale this. It's going to look very strange indeed. So, we're going to use these hiding objects.

I've created both of these objects as circles because I wanted to give sort of a natural edge to the liquid emptying. The other thing is that I've made them twice as wide as the tube because they have to go back and forth over the tube to make it look like it's filling. Let's start with the bottom one. Here on the left, I've created a path that follows the line of the tube. I'm gonna select that and select my hiding circle and create a motion path. I'll orient it at the top proxy here so that this hiding frame starts at the top of the tube and moves down.

Now, for the tube that's gonna make it seem like it's emptying, I'll do the same thing. I have another duplicate of that path. I'm gonna click on my motion path icon here and create a motion path. Orient it at the top. But in this case, I want it to hide until animated. We don't want this to show up before it's time to animate. Now, let's take a look at what we have. Things will be out of order, but we can still see if the action is correct. Glass filling, jar and there goes the tube and its emptying.

So I'll set that to a delay of say, half a second. Then the jar contents will start filling and we'll set that to a further delay. And the tube needs to empty out pretty quickly. Let's take a look. The beaker empties, the tube fills and the jar fills up. How about that? Quite a bit of chemistry, huh? Our scaling trick, along with some hiding frames and some clever motion paths, give us all the chemistry we need to use InDesign animations for filling jars and other containers.

Video: Filling jars and other containers