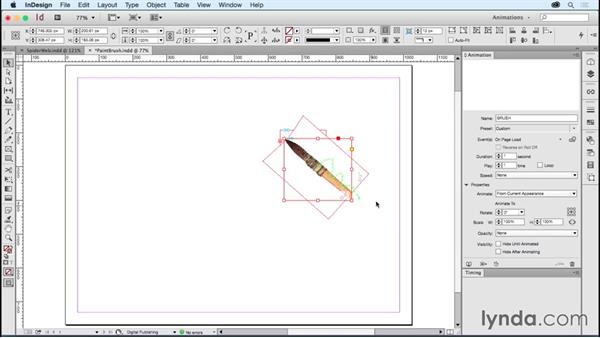 - It's fun to use InDesign animations to create lines that seem to draw themselves, and, as we've seen in another video, it's pretty easy to do that. But in reality, it takes another object to draw, or in this case, paint a line. I'd like to show you a technique that helps create this effect. Let me play this example in the preview panel for you. It's very simple. A paintbrush paints. To show you how this is setup, I actually have another paintbrush here that doesn't have any animations, and I'll turn this one off for now.

This kind of effect requires three parts. I'll separate these objects, so that you can see them more clearly. First, we need the line that's being drawn, in this case, the blue paint. Secondly, we need the object that's doing the drawing, our paintbrush. And then we need an opaque object that's going to at first hide this line and then reveal it. Now in other videos we've talked about using techniques such as non-proportional scaling or moving objects in a straight line in order to hide and then reveal something, but that's not really going to work in this case because this line is curved.

And if we just have a straight edge moving back, it's going to look really unnatural. So what we're going to do is create a motion path that mimics the curve of this line. I'm going to just use the pencil tool here, and I'll put it right over this line and just go back and forth. It doesn't have to be exact, but I want to get the approximate motion of this. So, there's my path, and now I'm gonna apply that path to the hiding object. So I'll select both objects, and then I'll click the convert to motion path icon in the animation panel.

Now, I need this same path for the paintbrush. I could've made a duplicate of it before I made it a motion path, but I can also just come in and select the motion path, copy it, and then paste it. And now I'll select my paintbrush and convert that path to a motion path. So first, we're gonna hide our painted line, and I'm gonna just position this approximately. I wanna make sure that it's covering the paint, but I don't need to match the motion path exactly with the painted line underneath.

Next, I'll move my paintbrush into position, and I'm gonna approximate its position, maybe down just a little bit more. And it too will move in this curved path. Finally, I wanna make sure that my hiding object and my paintbrush are moving at the same time, so I'm gonna come into the timing panel and select them here. These first two items are from the paintbrush that I hid. These are the ones we're working on now, so I'll click them both, and then link them in the timing panel.

Let's take a look and see what we have. We may need to make some adjustments. Not too bad. It went a little fast. If we wanna adjust the duration, we need to select both objects, the hiding object as well as the paintbrush or the drawing object, and then we can just increase the duration of both of them at the same time. Let's make sure I got them both, and if I preview again, it'll just paint a little more slowly. That's not too bad. Now you can play around with the exact positioning of the hiding object and the paintbrush.

The web is being woven. So, here we have the case of something drawing a line, the spider weaving its web. This file is really clever. It was actually put together by one of my students. Here, we have the spider that's moving on a motion path, and the hiding object is also a circle moving on a circular motion path, sort of in the same shape as that piece of the spider web. And if we look at the layers panel, I'll turn off that hiding path, there's the piece of web underneath.

So that's like our painted line, and then the circle is like the white frame that I used, and the spider is like our paintbrush. In the timing panel, the spider and each circle is linked together in the timing panel, the exact same technique that we used for our paintbrush but a very different look. You could use this technique to animate all kinds of everyday things from a pencil drawing a line to writing with chalk on a chalkboard, not to mention animating a whole world of all kinds of creepy crawly creatures doing their thing.