Creating your own motion paths 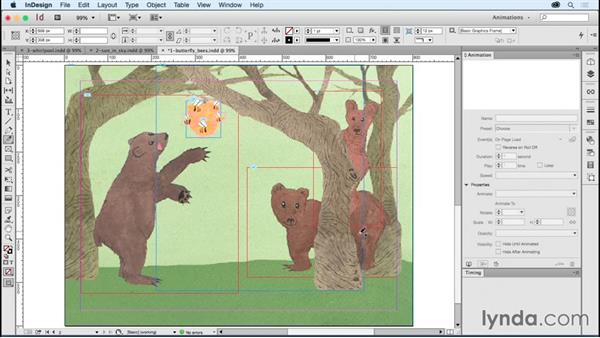 - You can use an animation preset to apply a motion path to an object, and then easily customize it. But you actually don't have to use the presets at all. You can use your own path in InDesign, any path that you can draw, and make that a motion path. Let's take a look. Here I have a butterfly that I'd like to have fly over to this group of flowers here. I'm gonna take the Pencil Tool and simply draw a path, like so. The path is set to the default 1 point width. I can see it, it's black.

And I've drawn it roughly from where the butterfly starts to where I want it to go. To make this a motion path, I simply select it, select the object I want to apply that motion path to, and then over here in the Animation panel is this great little icon called Convert to Motion Path. When I click it, watch what happens. My line no longer has a stroke on it, and it's now a motion path. It starts here. I can see that little green circle. And you can sort of see the little green arrow at the end here.

Let's preview it. There goes my butterfly. It's that simple. I'm gonna remove this motion path. With this object selected, simply click on the trash can icon here. Let me draw it again and show you a couple of other things that you need to keep in mind. It's a good idea, as I just did, to draw the motion path roughly from where you want it to start on your object to where you want it to go. I could just sort of sketch a line over here and make it end up in the center of this flower, but watch what happens.

With this line selected, and again, is has a stroke on it. That's actually very helpful, so you can see it. I'll shift click to select my butterfly, and now I'll create a motion path. When I do that, InDesign takes the start point of the path and it initially puts it in the center of the object that you're applying the motion path to. And then the line is repositioned accordingly. So now this line doesn't end up on the flower where I want it. I could select the path and modify it further with the Direct Select Tool, but that's a lot of work to select each point and they try to move the whole thing up.

It's better to just draw it where you want it in the first place. I can use this proxy to reposition it relative to the object. I've clicked the upper right-hand proxy here and it moves it, but it's still not where I want it. So, in this case, it's easier just to start over. Get my path drawing tool, in this case, the Pencil, for a quick and easy, and draw it where I want it. Then when I make the path, it ends up exactly where I need it to be. There's lots and lots you can do with this.

Let's look at another example. Here I have our friendly bears and they've found a beehive. Let's take a look. The bear hits the hive and off go the bees in all sorts of directions. Let's look at the motion paths here. As I click on each bee, there's the path. They're all linked together to play at the same time in the Timing panel. And in the Animation panel, they have this Motion Path applied, and the Preset simply says Custom. We made it from scratch ourselves.

And the process is the same that we used for the butterfly. I'm gonna remove the animation from this one bee by clicking on the garbage can. Now I'm gonna draw a path where I want our little bee to fly. And I'll just make a line through the forest here. There's our motion path with the stroke on it. I'll have that selected and then I'll shift click and click on our bee and click on the Convert to Motion Path icon, and there we go. Same principle as we saw with the butterfly.

Let's look at another example. I really like this animation. It's very simple, but we could only make it with the custom motion path. The sun comes up, high noon, and it goes down. I'm gonna turn to the next page in this file where I don't have the animation applied and show you how this is put together. First of all, there's some clever layering going on here. We have the land set as a separate illustration, and it basically is gonna hide the sun before it starts going in the sky and afterwards, so we don't have to use Hide Until Animated or Hide After Animating, although we could.

We're just using the land mass here to hide the sun for us. And here's my sun down here. Now, to make it go up into the sky, I'm gonna just use my Pen Tool and start drawing a curve that will arc the sun into the sky and back down again. There's my path, and now I'll shift click on the sun and make it a motion path. Great, let's see what we've got. I'll Preview it, and up comes the sun and down it goes.

Oh, that was really fast. That is a quick day. So to modify that, with our sun selected, I'm gonna increase the Duration, and let's slow things down a little bit. I'll set it to 2 seconds, and then we'll preview again. That's a little more like it. Still a pretty fast day, but you can make the duration anything you want, and I've simply used the Pen Tool to draw a path. One other example involves using a path that's not created in InDesign at all.

I'll select both objects and Convert to a Motion Path. There's my spiral. It starts at the leaf and goes down into the center of the whirlpool. I can move it over a little bit. And then I had a couple of other effects that I applied to it. First I want the leaf to rotate a couple of times going down, so I'll put in a number higher than 360. That's gonna rotate it more than once during the duration, which is 1 second. I think I'll up that a little bit to 1.5.

And the other thing I wanna have happen is as it goes down the drain, I want it to scale down, so I'm gonna set the Scaling value to 0 for both the Width and the Height. Let's take a look. Down it goes. And that's using a path that I drew in Illustrator. You can use any path whatsoever to make a custom motion path. There's really no limit at all in how you can animate an object and where you can make it move. With a little imagination and path creation tools, the sky's the limit.

Video: Creating your own motion paths