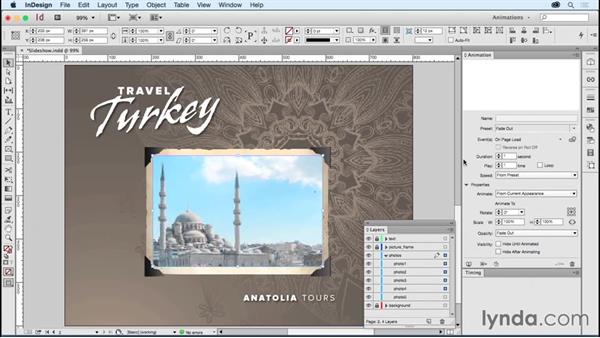 - One of the things that people ask me about InDesign animations most frequently is can you make a slideshow? The answer is yes, you can and it's really pretty simple to do. Let's take a look. I'll show you this slide show in the preview panel. These are some photos I took to a recent trip to Turkey. What a great country that was. You can see that the photos are cycling through one by one until we get to the last photo which now sits on the page. Let me show you the way that I set that up.

I'll close the animation panel and we'll turn to the next page where the photos aren't animated. There are a couple of different ways you can approach this. The important thing is that your photos are all in one layer. That's going to make it a lot easier to animate them, make it easier to select them, and then an apply an animation to them that will create our slideshow. I'm going to select them in order. Notice photo one is on top. That's photo one. Then that displays photo two and so forth. So the stacking order is important.

We're going to basically go through the stack from top to bottom. I'm going to select the first four photos not the last one, and I'm going to apply the animation fade out to those. What's going to happen is photo one will be sitting there and it's going to fade out and go away. Then you'll see photo two. Photo two will fade out and then you'll see photo three and so forth. I don't want to animate photo five because I want it to sit there at the end of the slideshow.

Let's take a look. If we view this in the preview panel, you'll see that we go right through the photos. It's moving really quickly though, you don't really have time to see the photos. So let's slow that down a little bit. We're actually going to do that, not by changing the duration. The duration in this case is only going to affect the transition from 100% opacity to zero percent opacity. To have the photos sit there for longer, we're actually going to the timing panel and I'm going to select each photo and I'm going to put in a delay of, let's say, one second.

With that, each photo will fade in and then sit there for a second. Let's preview it now. There, now you can actually have a chance to look at the photos. If you want them to display longer than they do now, simply increase the delay in the timing panel. If you want the transition and opacity to take longer, then you need to change the duration in the animation panel. Now we can actually do this a little differently.

We can stack in the opposite direction and I'll select these photos that I animated and remove the current animation from them. Instead of having them fade out, we can actually have them fade in from the bottom up. So, I'm going to start with the bottom photo, photo five, and then four, three, two, one and go up the stack. Now I'm going to choose the preset fade in. So what's going to happen is first you'll see photo five, then photo four's going to fade in on top of that and then three and then so forth.

Let's take a look. Photo five. Four, three, two, one. Again if I want them to display longer I can just put a delay in the timing panel. If I want the transition to take longer, I can increase the duration in the animation panel. You can also use this technique to make animated gif's play. You can take the various layers of an animated gif and instead of using fade in, just use appear and just set it to a really short appear and then it'll look like your animated gif is playing.

This technique works really great for slideshows, and it's really easy to set up. So, yes, you can do slideshows with InDesign animation and even better, it's super easy.