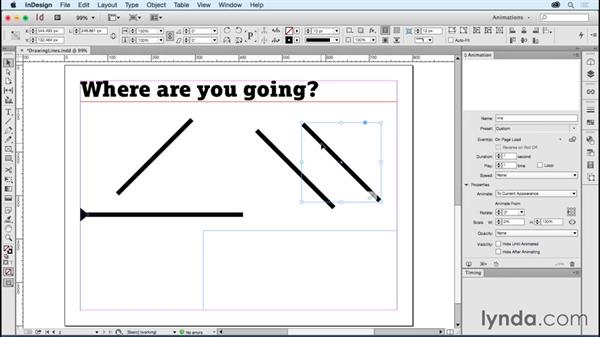 - One of the basic animation effects that I find I use frequently, is to simply have a line that draws in some way. It's an effect that's easy to do, but it does involve a bit of trickery. Let's take a look at some examples here. I'll show them to you in the preview panel. We have a horizontal line, a diagonal, a line with an arrow, and a curved line. Let's take a look at how these are done. I'm going to turn to the second page of my file, where the objects are not animated. Let's start with the horizontal line. For this, as I've shown in other videos, we're going to use a scaling trick.

I'll preview it for you, great! If I want it to grow in the other direction, I can just change the orientation point. There is a little trick with this diagonal line though that I want to show you. I'm going to draw a new diagonal line using the line tool and I'll hold down the shift key to constrain it to 45 degrees. I'm going to apply the very same settings to this line: 0 width, 100% height, to current appearance, and orient it on the left.

Let's take a look at this line. There's the first line, but oh! That is not right! What's going on here is because I drew the line at a diagonal originally, InDesign sees the width of the line from the left side of the bounding box to the right side of the bounding box. It sees the height from the top to the bottom, so it doesn't scale properly. When you want to draw diagonal lines, instead, start with a horizontal line, then rotate that line. I'll do this one in 45 degrees clockwise.

This way InDesign is going to see the length of the line as the width and it's going to scale it properly. So here's my 45 degree rotation and now, I'll set this to a width of 0, to current appearance. change the proxy, there we go, it works great. So that's a little trick with diagonal lines. Don't draw a diagonal first, with no orientation on it, draw a horizontal line first and then rotate it as you need it.

OK, let's get rid of these diagonal lines, and let's take a look at this line with the arrow on it. The trick here is as follows: I'm going to have the line, first, scaled the way we've been doing the other lines. It's going to start with a width of 0, and scale to its current appearance from the left, so I change the orientation proxy. Then, separately from that, I want the arrow to move to the right. So I'll set the preset Move Right. Now I want to be sure and turn on my animation proxy here and make sure it's the right length.

It's a little bit too long, so I'm going to move the motion path back by just clicking on it, that looks about right. And then finally, the last step, is to simply link these in the timing panel so that they play together. Let's take a look. Perfect! Nice trick, huh? Finally, let's look at our curved line here at the bottom. I'll move that into the center of my screen. So let's take a look at this, I'm going to open the layers panel and I want to show you there are two pieces here.

There is actually a frame that hides the curved line. We could call it a hiding frame or you could call it a revealing frame because at first it's going to hide the line, and then it's going to reveal it. If we try to format this curved line with our little scaling trick, we're going to have the same problem that we had with the diagonal line. It's going to scale in kind of a strange way. Let me show you what I mean. That's just not right, I mean, it's an interesting effect, but it's not the one we're trying to get here. I'm going to remove that animation, and we'll turn back on our hiding box.

But for really curvy lines, or especially circles, they're almost impossible to make them look like they're drawing themself with animation in InDesign, or at least I haven't figured out a way. The problem is, you can't hide them and then reveal them without the hiding frame going back on top of the circle, or really sharp curve. But for lines like this, it works great. A little scaling, occasionally a hiding frame, and you've got lines that can draw!