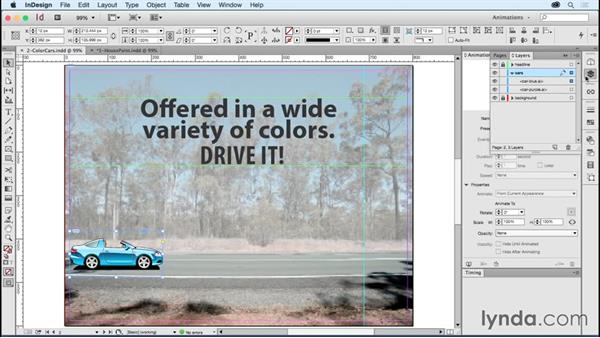 - Someone from Adobe once told me that the most widely used animation preset is Fade In with a close second Fade Out. I can see why. There's a lot you can do by changing the opacity of an object. Creating color transitions is one of them. Let me show you this example. Here, we have a house and we wanna show what it would look like in a new color. It starts white and slowly changes to this teal or tasteful colonial green, I suppose you could say.

Let me show you how this was put together. It's very simple, really. First, let's look in the Layers panel at what we have here. We have two versions of this house graphic. We have the original house, which is the white house, and then we have the teal colored house. Now, we could have cut this house out of the Photoshop file and put it on top of the white house, but there was no real reason to do that. We're just using the entire image again, except with the color adjusted which we did in Photoshop.

Once we have those two pieces, all we need to do is select the top house, the second color that we want to appear, and set it to Fade In. The only other adjustment that I made here was to increase the duration by 2.5 seconds. So the white house appears and then gradually over 2.5 seconds, the teal house fades in. Very easy, but very effective for showing this kind of thing. What would your house look like with a new paint job? Here's another example I'd like to show you.

You can also use Fade In and Fade Out to transition color on moving objects. Let's take a look. I'll show you this in the preview panel. Our blue car becomes purple, which one do you like? I'll show you how that was set up. I'm gonna turn to the next page of this file where I don't have any animation applied to the objects. We have this blue car and underneath it, I have the purple car. I'm gonna open the Layers panel and make sure that the blue car is selected first.

I'm gonna apply a motion path to that so that it moves to the right of the page. I'll start with Move Right, and then I'm gonna lengthen the motion path because I want it to go right to the edge of the page. I'll adjust it there and turn on my animation proxy, and that looks just right. Now the other thing I'm going to apply here is an opacity change. I don't have to use the Fade In preset. I can actually come down to the Opacity setting here and I want this car to Fade Out.

It's starting out blue and that color's gonna gradually go away. The other thing I'm gonna do is change the duration to 3 seconds, so that it doesn't move too quickly across the page. Now I need to apply this same motion path to the purple car underneath, and it's very easy to do that. I'm gonna just select this motion path and copy it. Then I'll go to the Layers panel and temporarily turn off the blue car. Now I'm gonna use Paste in Place.

That motion path is in the exact location it was for the blue car. I'll shift+click to select the purple car and use the Convert to Motion path icon to put that on a motion path as well. This car I want to fade in as it moves, and I'll set the duration to 3 seconds. The last step is I want them to move and play together. So I'm going to go to the Timing panel and select both of these and link them, so that they play at exactly the same time.

Finally, I'll turn our blue car back on and let's take a look. As they move, the blue car fades out and the purple car fades in. That's a nice effect. I'll show you one more example. I thought it was kind of interesting to take something like a wireframe, so the top car here is a wireframe and I basically applied the same effects to both the wireframe car and the completed car, and here you can see a transition going from wireframe to the completed car.

So think about using Fade In and Fade Out as a kind of automatic superpower opacity changer and you'll be able to change colors and create other interesting effects and hey, let's face it, a new paint job is always easier.