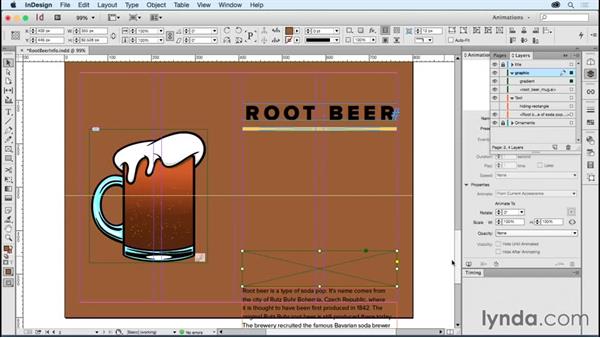 - One of the interesting effects you can create with InDesign animations is to have scrolling text come in on your page. Like many of our special effects, it's easy if you know a trick or two. Let's take a look at this example. I'm going to play it in the Preview panel. A root beer mug flies in, but look at the text scrolling up and changing opacity as it does that. Pretty cool, huh? Let me show you how it's done. I'm gonna turn to the second page of this file, which still has our Fly-In animation on the root beer mug, but the text scrolling isn't set yet.

I'm gonna open the Layers panel and show you a couple of things that we have set up on this page. We have a gradient frame here that we're actually going to use to have the text pass through it. I'll turn that off for a moment. Then down here is the text, but it has a hiding rectangle over it. Now, when you first see this effect, you might think, "Well, why don't I just use Fly-In from Bottom?" Well, let me show you what that looks like.

I'll put this text up into the position where it needs to go and let's apply the preset Fly in from Bottom. I'll increase the duration so it doesn't happen so quickly. Now, let's take a look at the preview. The text flies in, but it's actually changing opacity as it moves and it doesn't get to a 100% opacity until it's in position. Now if you like this effect, you can use this as a quick and dirty way of doing this, but I think our way looks a lot better.

I'm gonna undo this and bring the text back to its original position at the bottom of the page. Now, let's turn these pieces back on. First of all, right at the top of the text frame, which is near the bottom of the page, I have a rectangle that has the fill of the background color, but it has a Gradient Feather applied to it and it's at 90 degree angle. It's more opaque at the bottom and it has less opacity at the top.

The text is going to pass through this frame and it's going to give it the illusion of fading in. Next, I'm gonna turn on our hiding rectangle. That's going to hide the text as it comes in, but what's the text going to do? Well, let me hide our hiding rectangle again and I'll show you. What we're going to do with the text is have it move up into position by drawing a custom motion path. With my Line tool, I'm gonna start in about the middle of the text frame and hold down the Shift key to constrain it and create a path.

Next, I'll select the text frame and then I'm gonna go to the Animation panel and click the Convert to Motion Path icon. Now, let's turn on the proxy and see where this text is gonna end up. That's just about perfect. I think I'd like it to be up a little bit further so I'm gonna click on the motion path and edit it to make it a little bit longer. That's good. Move the text down just a tad. Great. Now, as this text starts moving up, it's already on the page, so you're gonna see it.

So, that's where our hiding rectangle comes in. The hiding rectangle is positioned right under the gradient frame and that's important because this frame, the hiding frame, is 100% opaque. So, the text can't be seen, but as soon as the text hits this gradient frame, you're gonna start to see it and then as it passes on through into this area up here, there'll be no opacity change and you'll see the text at its full strengths, so to speak. One last thing I'm gonna do is select my text, which I can just do in the Layers panel here, and I'm gonna increase the duration.

Otherwise, it's gonna fly in a little too quickly. I'll set this to a duration of three seconds. Now, let's preview and see what we have. The root beer mug flies in and here comes our text and see as it changes opacity as it goes through that gradient rectangle. It's a pretty neat effect, I think, and you can use it with all kinds of setups for animation. You could have text scrolling into a TV screen and movie credits and... Well, the possibilities are just endless.

Even though there's no animation preset for scrolling text, you can make your own using a motion path, a hiding object, and a gradient if you wanted to change opacity as it scrolls in. Now, I think I'll go have an ice cold root beer.