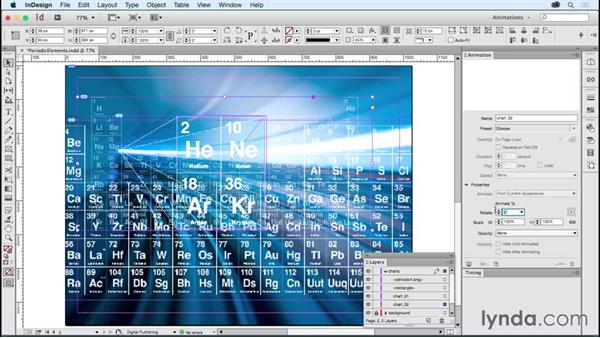 - When advertising leaps off the printed page and enters the world of digital publishing, animation can help you create engaging and memorable experiences for your advertising viewers. In this video, I'm gonna show you an example of animation that can be edited to your advertising. And hopefully, get some of your creative juices going. Let's take a look at this ad for a generic company that has, as part of its identity, something that can be rather mundane, the periodic table of elements. Let's see what a little animation can do for it. I'll show it to you in the Preview panel.

Pulls you in, doesn't it? And it's actually fairly simple to construct. Let's look first at the Timing panel so we can see what order things go in. There are really only four elements animated here. There are two periodic element charts, a rectangle that comes in behind the primary logo, and then the primary logo. I'm gonna turn to the second page of this file, where nothing has been anmiated yet and show you how this was put together. I've got the Layers panel open so it will make it a little easier for you to see.

The parts of this file include, two periodic element charts. This first one, which I've isolated in the Layers panel, if I click on it you can see that it starts out at a 90% opacity. The second chart is scaled down and it starts at a 45% opacity. These are both the same image, they've just been scaled and the opacity's been changed in InDesign before we even start animating them. The other elements are this transparent rectangle that come in behind the logo.

I'll select Chart 2, just right here in the Layers panel, and I'm gonna change the settings a little bit here. I'm actually gonna have it rotate counterclockwise by 40 degrees. I'll also have it scaled to 400% proportionally, and I want this chart to fade out, as well. I wanted to take a little bit more time to do its animation though, so I'm gonna set this duration to five seconds. This way they're rotating in opposite directions.

But I do want them to play together at the same time, so I'm gonna open the Timing panel, hold down the shift key, select them both, and then link them to play together. Let's see if we have those set up the way we want. Great. Next, I'll select that transparent background that's behind the logo. I'm gonna set that to Fade In using the preset, but I want to shorten the duration.

I want it to fade in pretty quickly. And now I'll select the logo graphic and I'll set that to Fade In, as well. And I want that to fade in, not as quickly as the rectangle, but a little more quickly than the default setting. Now there's one more thing I want to tweak. When the second chart fades out, but before it's done fading out, I want that transparent rectangle to come in. So I'm gonna do a couple of things in the Timing panel. I'm gonna set this rectangle to play at the same time as the charts.

But with this setting, as it is now, the rectangle will play immediately. I want it to play near the end of the rotation, and fade out of this second chart, which is set to a duration of five seconds. So even though these are set to play together, I'm gonna set the rectangle to come in at about 3.5 seconds. So I'll set a delay right here in the Timing panel. Let's take a look. There comes my rectangle and then my logo.

That's it, I really like that. I could play around with the timing a little further, but I think this is good. It's pretty interesting, I think, what can be done with a couple of different settings. Some scaling, some rotation, and fade in. Hopefully these will help inspire you and see that with InDesign animations, a little thinking outside the box, well, it's elementary, really.