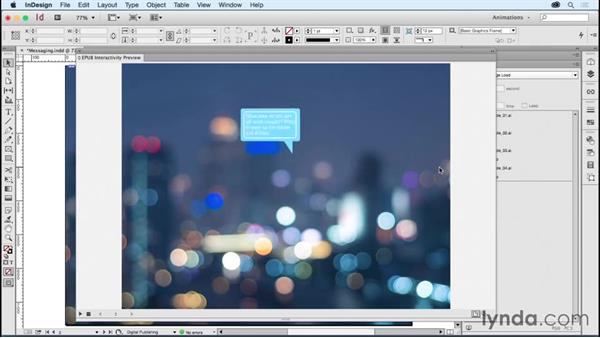 - One of the ubiquitous graphic visuals of today are those little text bubbles that signify a message or tweet. I see these everywhere, from TV shows to print advertising. I wanna show you a couple of different ways to animate these images so you can make them a part of your visual repertoire. Here's the first technique. I'll show it to you in the Preview panel. The message pops in, and then see that action after it comes in? It moves just a little bit, and actually gets a little smaller. Let me show you how that was done.

I'm gonna go to the second page of this file where I've left the first two bubbles animated but the second two are not. The first thing that happens on all of these bubbles is that they scale in from zero percent. So I'm gonna shift-click on these bubbles and set the scaling from zero percent for width and height, and set them of course To Current Appearance. I want them to come in pretty quickly, so I'm gonna change the duration. Let's set the duration to half a second each.

Now, the next step is I need to put that secondary animation on them, and we can't apply a different animation to the same object, but we can use our little grouping trick to make a new object. I'm gonna get an empty rectangle here and just draw a rectangle next to each bubble. Then I'm gonna select the rectangle and the bubble and group it. It's important to name these groups so that you can see them in the Timing panel and know which group is which. So I'll call this "Bubble3group" and then we'll go to the last bubble and our empty rectangle.

I'll group that. Command- or Control-G, and we'll call this "Bubble4group." Now, with these groups I have a new object and I can put another action on them. I'm gonna have this bubble scale to 90 percent, but I want it to happen really quickly, so I'm going to change the duration to .25 seconds, and I'll do the same thing here. I want it to scale down just a little bit and I want it to do it quickly.

Finally, I have to order these in the Timing panel because, remember, animations show up in the order that you actually create them. And I animated both speech bubbles coming in and then I animated the little scaling action afterwards. So I need to put these in sequentially. I'll move the Bubble3group that's scaling after the bubble that scales in. Let's take a look. First message. Notice how these move a little bit, as well as scale.

That's just because they're scaling to center and with that rectangle on the side of them, the center point of the object is just a little bit different. So, I like that effect. It's much better than just flat bubbles coming in. Let's look at a slightly different technique. I'm gonna turn to the next page of this file and let's look at it in the Preview panel. In this case, the bubbles come in and they actually move a little bit. Just a little bit. Again, so that they're not just sitting there once they come in.

Let's take a look at how that was done. I'm gonna go to the next page of this file and the first two bubbles are animated. The third and fourth bubbles are animated as well, in that they're both set to scale in from zero to the current appearance. And I've already made my groups, as you just saw me do. In this case, though, we want our secondary movement to be a little jiggle. To that end, we'll use a Custom Motion Pad. I've already drawn my jiggles over here. I just used the Pen tool and made a path that goes one direction and then back the other in very small increments.

I'm gonna just grab these from the Paste board, move them onto my page, and then I'll select one and select my group here and I'll use the Convert to Motion Path icon on the Animation panel to make the motion path apply to our bubble. Then I'm going to click the second path and click on this bubble and also convert to a motion path. Notice, it doesn't really matter where the originally drawn path is located. As soon as I convert to motion path, it's going to snap to the center of the object that you're applying it to.

Now, I do want these little jiggles to happen very quickly. So I'm gonna change the duration here. Let's set it down to a quarter of a second again, and I'll do that for each one. Again, I need to check my Timing panel and I need to move the secondary action for Bubble Three after the primary action of Bubble Three. That looks good. That should do it. Let's see what we have here. Bubble One comes in with the little jiggle. Two.

Three. And four. There are all kinds of little secondary effects that you can use to give bubbles a little bounce. The key is to start with the initial bubble scaling in from zero percent to the current appearance. Then group each with an empty shape to create a new object that you can animate with a little bounce or other movement. That's right. Give your messages a little bounce.