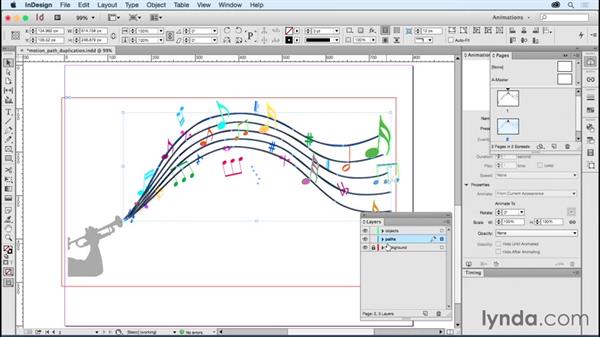 - Sometimes you'll encounter a project where you need more than one custom motion path. Let me show you an example from a recent project of mine. Here we have musical notes flying out. You can almost hear the trumpet playing. All of these notes that are moving had to follow the path of the music lines here. Let me show you a couple of tricks for setting this up. I'm gonna turn to page two of this file where I have one of the notes with the animation taken off of it.

And again, this is just an example of how these motion paths really are standard paths. I can select it and copy it and paste it somewhere else. So now let me move this path onto the path that I need for this green note. The problem is it doesn't exactly match the curve. If I start it down here, yeah, no, it's really off. All of these paths are a little bit different from one another, so copying in this case doesn't exactly help me. Now I could use my Direct Selection tool and edit this path, but that's a lot of work.

Let me show you the way I ended up setting this project up to help make these motion paths a little easier to work with. I'm gonna open the Layers panel, and I'll move it over here so we can see it a little easier. The way I started this project was I drew all of my paths. I used the Pen tool and drawing from left to right, I drew each path individually. And these are all on their own layer called "Paths." I knew I would need each of these paths several times to animate these notes, and actually the final project had even more notes animated.

I keep the paths in this layer and then, here's the fun part, when I need a path I simply turn on the visibility of the paths layer and select the path I need. This is the path for the green note. Now I'm going to make a duplicate of that path into the layer that has the objects I want to animate. I'll hold down Option or Alt, key, grab the selection proxy, and just move it into my Animated Objects layer. I'll hide my paths and now look, I have a perfect path there.

I can simply select the path and the note, close my Layers panel, and create a motion path. The problem is here that the direction isn't right. I actually am going to need this note to animate To Current Appearance because I want it to scale up as it moves. So I'm gonna undo this, Command Z, and I'm going to reverse the direction of this path before I make it a custom motion path. To do that I'll go to the Object menu, choose "Paths," and "Reverse Path." The path looks the same, it's just going in the opposite direction, it now starts on the right and goes to the left.

Now I'll Shift click and get my note, and create a motion path. It's on the correct side of the note and I'll animate it To Current Appearance. Then I want it to start at a smaller scale, let's start it at 5% width and 5% height. Then finally the last thing I'll do is move this into position. It's at the bottom of my Timing panel, since it's the last thing I animated, and I'll bring it up and make it the very first note that animates.

Let's take a look and see what we have. There we go, perfect, and the path is perfect, and I didn't have to draw it each time. I simply created it once and then copied it from a special layer just for paths into my object's paths. For these other notes that have shorter paths, it was pretty easy to bring in the path for this line and then just delete points along the way and finesse the final point here. It made the whole process pretty painless.

And hopefully this shows you just how flexible custom motion paths can be. They're easy to duplicate and reuse, and they allow you to make complex movements with your InDesign animations easy as playing music.