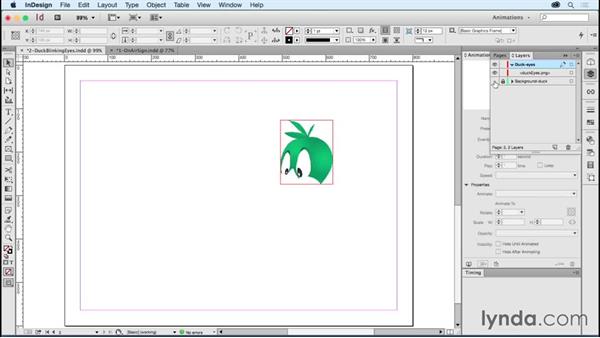 If you think about it, all kinds of things blink or flash, whether it's a neon sign, or beautiful blinking eyes. This kind of effect is ideal for InDesign's animations. They're easy to set up using Appear and Disappear presets with a few tweaks, depending on exactly what you want. Here's an example of a simple flashing sign. I'll show it to you in the Preview panel. We're ON AIR, folks. Let me show you how this was set up. Now you might think that you somehow try to make the letters themselves flash, but that's not it at all in this case.

Our sign is made up of two pieces. We actually have an off state here, and then design itself, underneath. We're gonna make this off state do the flashing. I'll press command or control Z, to put that back into position, and you see that we have the preset Disappear set on our off state. We set it to disappear because we want it to be there at first, and then we want it to disappear so that the ON AIR sign underneath shows.

I started with the standard Disappear preset, then I increased the duration to 1 second and make sure that it's looping. If I want it to take a little longer to flash, I can increase the duration. So I'll set that to 2 seconds and then we'll preview it. It just flashes a little bit more slowly, because the offset doesn't happen as frequently. And that's all there is to it. For signs, you don't typically animate what's on the sign, you put something behind the sign and make that appear or disappear.

Let's look at another slightly more complex example. Here we have a cute little duck and I'll show you how it's animated in the Preview panel. The duck has a look of great surprise and opens its eyes wide. Let me just show you how that was set up. I'm gonna go to the next page in this file, which doesn't have any animation, and first, let's look at the pieces that we have to work with. The background and the whole body of the duck are one piece, or in one layer, I should say.

And the duck eyes, the eyes growing large, are also a separate piece, like so. It's the duck eyes that we're going to make flash. So I'll close the Layer panel and now, let's set these eyes to Appear. This will be just the opposite of how we set the neon sign, because in this case we don't want them to be there to begin with, we want the eyes to be closed and then we want the eyes to open. So I'll do what I did on the neon sign, I'll set this to 1 second and I'll set it to Loop and let's take a look.

Well they're blinking, but they're blinking a lot faster than I wanted. What I want is I want the eyes to stay wide open for a longer period of time. That's where our little trick comes in. I'm gonna turn off looping, I'll leave this Set to Appear for a second, or I could just use the default preset, it doesn't matter. But what I'm going to do is I'm going to draw a blank object somewhere on the page. It doesn't really matter where it is, but it has no fill or stroke. I'm gonna set this object to Appear, and I'm gonna increase the duration of this, I'll make it 2 seconds.

In this case my rectangle is set to 2 seconds. So the duck eyes can't loop or repeat until this rectangle has completed its animation. That's what makes the duck eyes sit there longer. If I wanted the eyes to stay open longer, I would actually increase the duration of the rectangle. So blinking, or flashing, is easy to set up with InDesign animation, using Appear, or Disappear, depending on how you want the animation to start. Throw in a little looping, and you're ready to blink the day away.