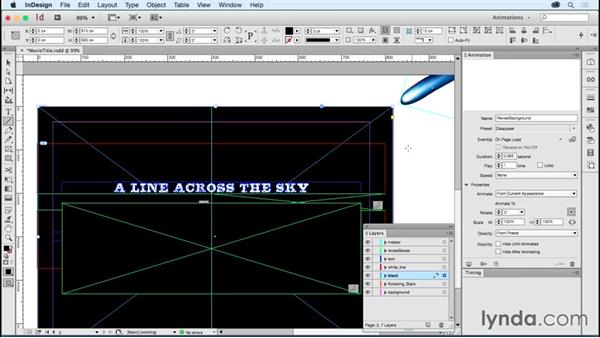 - InDesign's animation features can be applied and layered together in a way to create compelling vignettes that tell a story. Think about the opening title sequence in a movie. It can give you a strong feeling of what's to come. In this video, we're going to create our own little movie title sequence. Let's take a look. The action begins. Our title comes in. The sky brightens. A meteor falls, and our subtitle comes in. Let me show you a little bit about how this file's put together.

Let's start by looking at the Timing panel. It looks complicated, but it really isn't. If we start at the top of the Timing panel, the first things we have are a couple of boxes that will scale disproportionately to have the line draw across the sky. We've seen that trick in other videos in this course. Next, the title sequence will come in, and there are a couple of boxes that are going to do some hiding and revealing tricks. Then this next group looks complicated, but it really isn't. It's a bunch of stars that are set to, sort of, randomize, so that the twinkling looks natural, and then our subtitle comes in.

Let's see exactly how this was put together. I'm gonna turn to the second page of this file, and I've actually put a screenshot of the Timing panel over on the left, so, if you're working with the exercise files, you can reference it pretty easily. The first animation that we need to set is for these boxes to scale, so that the line draws. I'm gonna select them here in the Layers panel. There's a lot of stacking going on in this file, and I wanna be sure I'm selecting the right thing. I'll set them to Scale non-proportionately, with the width of zero and a height of 100%.

Now, they both have the same scaling, but I need to change the orientation point for each one. The one on the right, I'll orient to the right, and the box on the left, I'll orient to the left, and the last step is, I'm going to set them to play together in the Timing panel. Let's take a look. Perfect. Now, the next thing we wanna animate is our title text. We're actually gonna have this fly in from the bottom, so I'm gonna use the preset, Fly in from Bottom.

Normally, it's gonna start about here, and then move up the page, but we don't want it to show until it's actually crossed that white line, so we have this hiding box here. It's going to hide the text as it moves across the page until it's in the correct place. Once this box has done it's job of hiding our title text, we want it to go away, so I'm gonna take this hiding text frame and set it to Disappear. That'll be the next thing that happens in sequence.

Next, we want that starry background to come in, so I'm gonna select this black frame that covers the entire sky, and I'm gonna set that to Disappear. The next animation we wanna set is to have our meteor fly in. It's sitting on the Paste Board, off the page, and, to make this move, I'm gonna create a custom motion path. With the Line tool selected, I'll start in the middle of my meteor, and I want it to come to approximately this location. It doesn't have to be really exact.

Now, I'll hold down the Shift key, and then, in the Animation panel, I'll click the Convert to motion path icon to make a motion path. I wanna change the duration. I don't want it to come in too quickly, so I'm gonna set it to two seconds, and I also want it to fade out as it flies in. Now we'll work on the twinkling stars. The twinkling stars are basically made up of two different images. One is a brighter star than the other, and I just placed a lot of them and moved them in random locations on the page.

I also gave them names and, what I'm gonna do now, to give them a sense of twinkling randomly, is I'm gonna select groups of them and give them slightly different settings, so I'll select the first group, and I'm gonna set them to Appear. I'll give them a duration of, let's say, two seconds, then I'll select the next group of about the same number. I think I have 20 here in all, so I'm just holding down the Shift key and going down the Layers panel. They're all over the page. They're not in the order of the Layers panel as far as their visual appearance on the page, so I can just use the panel to select them all.

I'll set the duration for this group to 2.5 seconds, and then I'll get the last little group, and I'm gonna set those to Appear as well, but I'm gonna lengthen the duration even a little bit more. Set them to Appear. I'm gonna set these for three seconds. Now, because we want the stars to start twinkling and keep twinkling, I'm gonna select all of them just by selecting this Layer, and I'll set them all to Loop. One more thing we wanna do with the stars is set them in the Timing panel.

I'm gonna select the meteor, and most of our stars, and link them. They'll play together, but, because they're different durations, they won't play exactly simultaneously, and then I'll just take another group down here and link it to start playing afterwards. The last step is to animate our subtitle, so I'm gonna open my Layers panel and select the subtitle. For that, I'm gonna set a simple fade in. The last adjustment I wanna make to the subtitle, though, is I want it to start playing at some point after the stars start twinkling, but not right away, and not after they are completely done, so I'm gonna put the subtitle in with the stars, but I'm gonna put a slight delay on it.

I'm gonna say, "I want you to come in, "in about 1.25 seconds." There. Let's take a look and see what we have. The line draws, the type comes in, the sky appears, the meteor, and the subtitle, and we have our random twinkling stars. Beautiful. I think with this example you can really start to see how we can use all the little tricks we've learned throughout this course, from making custom motion paths, to hiding things, and using the Timing panels to create really rich layered animation.

Makes me wanna see the movie.