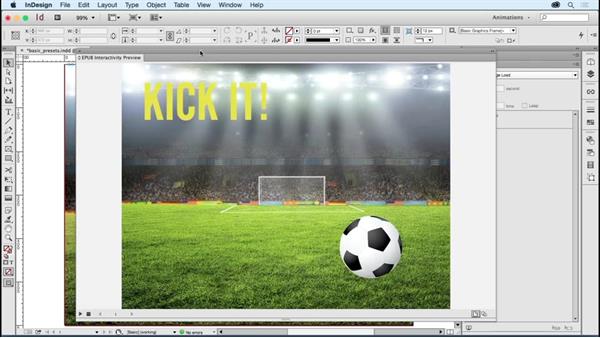 They're not really grouped by function. The top part of this menu has what I call the simple presets. These are presets that you could set yourself. The bottom part of the menu has what I call the complex presets. These are presets that you can't really set yourself. All of these presets are motion presets that originally came from Flash Professional, and these bottom presets use timelines, and speed settings that we just don't have access to through the inDesign interface. Fortunately, all the animation settings are exported as HTML now, so they're a lot more flexible.

To apply a preset, we select an object and then choose a preset. My type is already selected and I'm gonna choose Fade In. Now I have to apply an animation to an entire object. I can't just select part of the text in a frame and apply a preset to it. So I've applied this Fade In preset and notice on my type frame, I have this little icon or adornment in the lower right hand corner. That let's me know there's an animation on it. The Fade In preset also made some changes in the Animation panel. For one thing, the opacity has been set to Fade In.

Fade In changes the opacity of an object from zero to 100% over a period of time. In this case, duration which you can see here is set to 1 second. It also changed the speed or easing. It says from preset, so I don't know exactly what that is, but it's either an easing in or an easing out. I'm gonna apply the same preset to my soccer ball. We'll select it and choose Fade In. We see the little icon here and also notice at the top of our panel each time we've set this animation preset, we get a little preview of it with our butterfly icon here.

Now, let's see what these animations look like. I'm gonna open the Layers panel and turn on a little background graphic I have there. Bring us into the stadium, and now we'll preview. At the bottom of the Animation panel is this icon for previewing. We can preview EPUB or SWF as you can see in the tool tip there. SWF files really aren't used that much anymore so we're gonna always use the default and use the EPUB preview panel. I'll click on the icon and you'll see our animation begin. The type fades in, followed by the soccer ball.

There are other presets that change opacity. In addition to Fade In we can Fade Out going from 100% opacity to 0% opacity, and we also have Appear and Disappear. These presets change the opacity, but they do it very quickly. There's no visible change in opacity. They just make something appear. Other presets that we have apply motion to objects. First, I'm gonna remove the animation from our type. To remove an animation, simply click on the trash can icon at the bottom of the Animation panel.

If I wanna change the animation, I don't have to delete it first. I can just select the object and then apply another animation. In this case, we're gonna look at some of our animation presets that apply motion. Let's try Move Left. When I apply this preset, I get a motion path. This shows me where the soccer ball is going to move. It starts at the right, and moves to the left. If we zoom in, I'm holding down the z key here, this circle tells me where the beginning of the motion path is, and this arrow marks the end of the motion path, so I always know which direction it's gonna go.

If I wanna get an idea of where this soccer ball is gonna end up when it moves, I can click on the little animation proxy here at the bottom of the panel, so that's where it's gonna go to. Let's preview it. This time instead of clicking on one of these icons, I'm gonna use the keyboard shortcut. The keyboard shortcut is shift+opt/alt+return key. There goes my soccer ball. There are several other presets that apply motion. In addition to Move Left, of course we have Move Right, and then we have a whole series of presets Fly in from the bottom, left, right, and top.

Or Fly out from an area on the page off to the bottom of the page, out to the left, and so forth. Other presets change different settings. We have some presets that change the scaling factor, for example, we have Grow, Grow Large, and Shrink. Our soccer ball is already selected, so I'm gonna set it to Grow. When I choose the Grow preset, notice the change here is that the scaling has changed to 200%. Let's preview that with our preview shortcut. Shift+opt/alt+return.

And the ball grows; it's a big soccer ball now. Besides scaling, we can rotate with presets. Here we have Rotate presets that let us rotate 90 degrees, or 180 degrees clockwise, or counter clockwise. I'll apply one of those to our soccer ball, and we'll preview it again, and you'll see the ball spinning. There's a little bit of easing going on there. I don't know if you notice, but there was a little change of speed and indeed we have a preset speed here, which means there's a little Ease In or Ease Out.

A couple of these presets are not ones that we can easily adjust ourself. Spring Left, Spring Right, and these Zoom In and Zoom Out are settings that we can't really make ourselves, but for the most part, we could apply the animations that these presets give us on our own just by making changes in the Animation panel, but it's faster to use the presets and as I mentioned sometimes you'll start with the presets and then modify the panel further. The presets overall are a good place to start working with inDesign Animations.