Applying multiple animations to one object 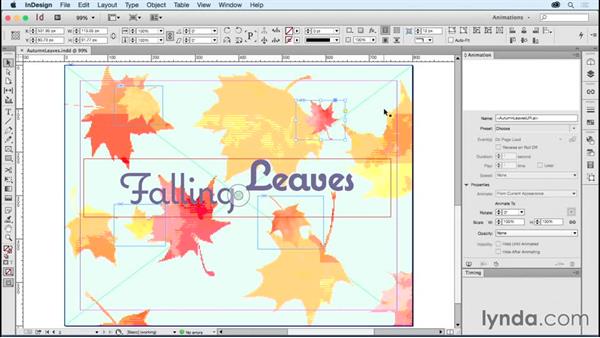 - As we've seen, we can animate an object using several different properties at the same time. For example, an object can have a motion path and at the same time, it can rotate or scale or change opacity as it moves. What we cannot do is apply two different animation presets to the same object, nor can we apply one property to an object and then follow that with another property that happens right after that. We can't do that on one object, not just by using the animation panel directly. If, for example, you want to have an object fade in and then move after it fades in, that's too different animations.

However, there is a little trick with grouping objects that lets you achieve the effect of being able to apply two distinct animations to one object. I want to show you a simple example of that where we're going to see an object fade in and then fade out. Normally, from the animation panel, you can only set one or the other on an object, but we know the trick. Here is our completed animation. You're going to see our Autumn leaves fade in and then fade out. It appears that the same leaf is fading in and then fading out.

It has no purpose, except to be grouped with that leaf. I'll shift click and select them both. Now I'm going to group them using command or control G. Now I have a group and it's actually a new object which I can apply another animation to. I'm going to give it a name and I'll call this leaf fade out so I can keep track of it in my timing panel. Now, for this object, I'm going to set the option fade out.

If we look at the timing panel, we'll see that the first animation that we have, I'll double click this to select it, is the graphic Autumn leaves fading in, but then we have this group that fades out. Let's preview this and see if it works. It works like a charm. You can use this little grouping trick for all kinds of animations. It's not something that you set automatically from the animation panel, but by creating a new group with your initial animation, you essentially make a new object that can then have the second animation applied.