Applying animation to multiple objects on one page 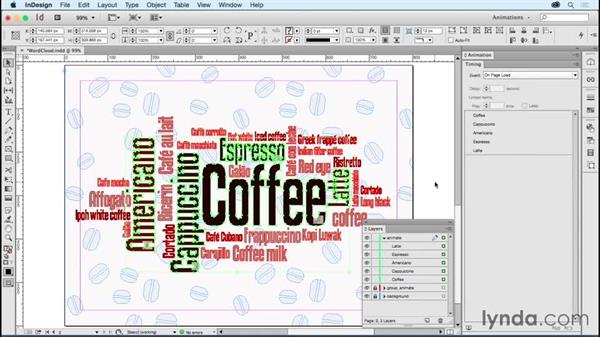 - Sometimes you'll want to apply the same animation to several objects on your page at once. Maybe you want to create a bunch of dancing bees around a hive, or maybe you want several different objects to fade in. So you need to apply that preset to more than one object. Fortunately, you don't have to apply animations one by one. If it's the same animation you can select multiple objects at once and apply the animation. The trick is establishing the order the objects will play in. Let's take a look at this example. I'm going to play this animation in our preview panel and it's a word cloud, and you'll see the words come in one by one.

They're actually in alphabetical order as well as running from left to right, and then a group of words comes in. Let's take a look at how to animate this and make it play in the order we want. I'll close our preview panel here and I'm going to turn to the next page of this file, which has the same page but with no animation applied. The way the file is set up is the background is in one layer, the group of words that animate is in another layer, and then my single words that I want to animate are in their own layer, and it's the only layer that's unlocked.

So, if I want to apply the same animation to all of these, which will be a fade in effect, I'm gonna just select them all. Command or CTRL + A. Now I'll go to my animation panel and apply the fade in preset. They all now have this setting. However, the order that they play in is not exactly what I want. I wanted these in alphabetical order, and you can see that they're not. Coffee is first, and Americano, which should be first, is third on the list. If we look at the layers panel, we'll see a similar relationship.

It's looking at the order that objects were put on the page initially. That's the information it's holding in its database. Let me show you what I mean. I'm gonna remove all the animation from these objects, and now I'm gonna put Coffee which was the first thing on the list, I'm gonna put it up above Americano. With everything still selected, I'll apply fade in. So, you might expect the timing panel to order these Cappuccino, Americano, Coffee. But in fact, it didn't change the order at all. That's because in the InDesign database, it saw Coffee as the first item that was put down.

If you want the order that objects were put on the page to change, you could export this as an IDML file, and then they'll sync up with the actual order of your layers panel, and in turn sync up with the timing panel, but that's a lot of work. The easiest way to control this timing has to do with the order that you select things in. I'm gonna go back to the animation panel and remove all of this animation again. Now, instead of doing a Command + A, what I'm going to do is select each object in the order I want it to animate in. First, Americano, I'll hold down the shift key, Cappuccino, then Coffee, Espresso, and Latte.

Now I'll apply that fade in preset. When I do that the timing panel shows the animations will occur in exactly the order I want, having nothing to do with the order in the layers panel. It only has to do with the order that I selected the objects in. I can select the objects on the page itself as I did here, or I could also select them in order by choosing the little proxies here in the layers panel. Either way is fine. It's just that the timing panel is going to look at the order you selected the objects in.

So, any time objects share animation attributes, you can select them together and make changes in the animation panel and apply any attribute you like. Just remember the order you select the objects determines the order the objects will animate in, as shown in the timing panel. This can make it a lot faster to get certain types of animations done.

Video: Applying animation to multiple objects on one page