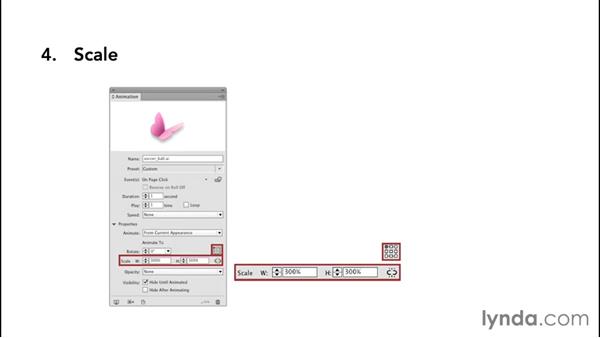 - Before we start working with Animation Panel itself, I thought it might be helpful to give you a quick overview of the panel, so you have a better understanding of what you're looking at when you actually start using it. It's important to know what you can control, as well as what you can't. The Animation panel is where the action is when it comes to animating InDesign objects. The Timing panel plays an important role too, but the Animation panel is where you set the actual animation on an object. The Timing panel lets you control the timing of those animations. There are 48 animation presets that control five basic animation settings.

We're gonna talk about the animation presets in another video in this course, but the main thing to understand are these five basic animation settings that you can control. You can do an awful lot with them, but there are only five properties that you can change. The first is motion. You can apply a motion path to any object and make it move, like so. You can control the speed of an object and there are two areas in the Animation panel that let you control this. One is duration. You can set an animation to run longer, which slows it down, or run shorter, which speeds it up.

The other control you have is under speed, but I have an asterisk by that and call it easing because that's what it really is. It's not like you can go in and put a speed setting that you want like move so many pixels per second or something like that. In fact, you can just have a menu choice to ease in, ease out, or ease in and out. Think of easing as acceleration and deceleration. If something eases in, it starts slowly and then speeds up and vice versa for ease out. Like this, notice our soccer ball starts really slowly and then it speeds up.

It took three seconds to move across the page. We can animate an object by having it rotate. For rotation, we can put in any value we want, up to 7200 degrees. We can also change the orientation point from which an object rotates. With rotation, we can have things like spinning balls. We can adjust the scaling of an object. We can have it grow or shrink as it moves. As with rotation, in scaling we can put in any value that we want up to 7200%.

We can also have an object scale disproportionately or proportionately as it animates. We can change the orientation point of the scaling. So, we can start with something small and have it grow large. Finally, we can change the opacity of an object, but again, I have an asterisk here because we can't put in any setting that we want. We can only choose from an opacity menu in the panel. We can fade in or fade out and basically, fade in lets us change the opacity of something from zero to 100 % and fade out goes from 100% to zero% opacity.

That's it. It's a nice effect though and you can have something come in very gradually. These properties are the properties that you have control over. Motion, speed, rotation, scaling, and opacity. You can apply one of them to animate an object or you can apply all five at one time and have something that moves and scales and rotates and fades out all at the same time. These are the settings that we have to work with. There are some other icons on the animation panel that you should get really familiar with.

Along the bottom of the panel, there are icons, including starting from the left, an icon that lets up open the preview panel. You'll be using that a lot. To the right of that is an icon that shows an animation proxy. We can click on this and see where an animation is going to end up. It gives us a little gray square that shows us where something's going to stop when it's moving. The next icon is a link to the Timing panel. Click there and the Timing panel will open. The next icon is an important one. Convert to motion path.

This lets us take any path in InDesign and convert it to a motion path and apply it to an object to move. Finally, the trash can on the right lets us remove any animation from an object. So, you can see this little Animation panel has a lot packed into it. Now it's time to start using the panel and seeing it in action.