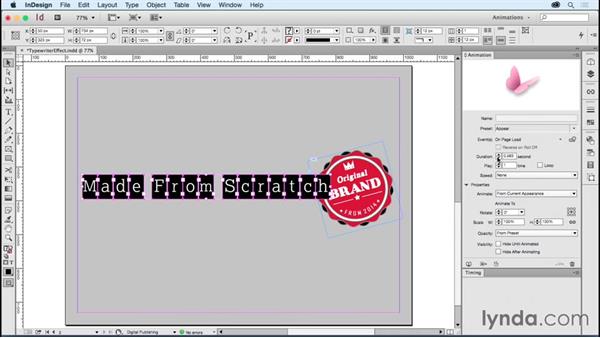 - A very traditional kind of effect you'll see with type animations is that of an old typewriter. Making type type. Let's take a look at our example here. I'm going to open it in the EPUB Interactivity Preview Panel. Type type type, type type type, Made From Scratch. There it is. Each of these letters, in order to make it type, was initially set to Appear but notice it says Custom here so I made some changes.

I lowered the default Duration, I removed the Opacity and I set it until Hide Until Animated. If I set back the Appear preset, you can see that the settings change. Let's take a look at how the whole thing was setup. I'm going to turn to the second page of this file where I don't have any animation and show you how it was done. First, I'm going to select all of these letters. They happen to be in the correct order so when I animate them, they should animate in the order that I want. I'm going to choose the preset Appear.

And first let's check them in the Timing panel. Made From Scratch, that's what I want. Each letter coming in in the right order. Now, I'm going to first lower the Duration to the lowest Duration that we can have in the Animation panel which is 0.125 seconds. Let's preview this. There it is, nothing happens. Why is that? Well, part of the reason is that there is a slight amount of an Opacity change with the Appear preset.

I'm going to remove the Opacity altogether. I don't want any Opacity change, I just want it to Appear and in a very short amount of time. Let's preview it again. Now, it's there all at once. The reason it's there all at once is again, this is such a short Duration, that the type just all comes in almost instantly. That's why the last setting that I want to make is to set the Visibility of Hide Until Animated.

That will force each character to wait until its turn to animate. Let's check it out. There we go, typing type, now it works. So to create typewriter type that types out quickly, first use the Appear preset, lower the Duration, remove the Opacity preset, and turn on Hide Until Animated. Then type away.