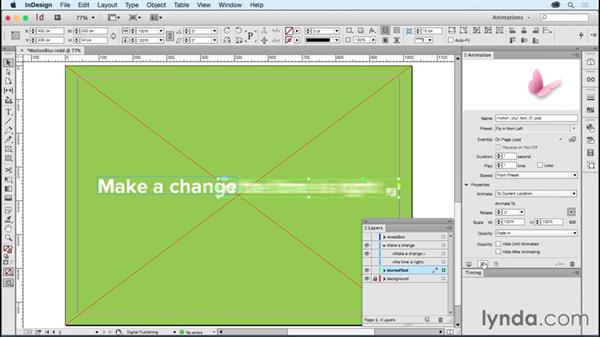 - Here's one of my favorite animation effects for type, creating a motion blur, or the illusion thereof. Let's take a look. We'll view it first in the Preview Panel. The type flies in and then comes to a screeching halt. Let me show you how it was done. I'm going to close the Preview Panel and I'm going to turn to the second page of this file which doesn't have any animation on it. I'll switch from Preview to Normal Mode by pressing the letter W. And let's take a look at the various elements we have on this page.

First of all we have two blocks of type. "Make a change", "the time is right". Then we have our blurred text. This was actually created in Photoshop. A blur was applied in Photoshop and the file was placed in InDesign. The last element on the page is this reveal box, it's actually a hide box. It's on the top layer and it has the same green fill as our background. What this is going to do is hide the blurred text as it comes in and make sure that it doesn't show up until it gets to just the right spot, just about here.

Let's apply some animation now. I'll apply the animation in the order it needs to occur. First I'm going to select the text "Make a change" and I'll just click on it right here in the Layers Panel. I want this type to appear so I'll just apply the preset Appear. And I don't need to change any of the settings here. Next we'll select our blurred type. I'm going to turn off the static type for just a moment and select this in the Layers Panel. And we want this type to fly in from the left so I'll start by applying the preset Fly in from Left.

If I click on the Proxy Panel though I can see that it doesn't start far enough off the page. So what I'm going to do is edit the motion path so that it starts further over. I'll click on the motion path, which is this line here, and I'll simply drag it off onto the Pasteboard. If we check our Proxy again that's perfect. Now it actually starts under this hide box but that's okay, that's what the box is there for, to make sure that it doesn't show up too early. Once the type flies in we want it to fly in, come into position, and then we want it to go away so that the type underneath appears and makes it look like the blurred type stops.

To accomplish that I'm going to come over here to the Animation Panel and set the Visibility to Hide After Animating. The type will fly in and then it'll go away. Finally we want to bring in the type that's static. So I'll select that in the Layers Panel and we'll set it to Appear. This time though I want it to happen really quickly so it pops in as soon as that blurred type goes away. So I'll set the Duration to the lowest duration possible, .125 second. I want to remove the Opacity change that's coming in from the presets, so I'll set that to None.

And finally I don't want it to show up until it's time so I'm going to click Hide Until Animated. Now we have the three objects, "Make a change" comes in, the text flies in, and then "the time is right" appears. Let's take a look at it in the Preview Panel. Perfect, I just love that. You can see it's pretty easy to create this illusion of motion blur on type. Start with creating the blur effect in Photoshop, then add the motion with animation in InDesign.