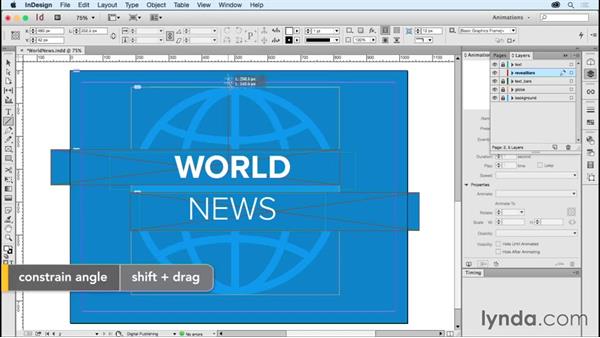 - If you remember the old days of TV news programs, you've probably seen a logo similar to this one. Let's take a look at it in the preview panel. World News Tonight. It looks pretty straightforward, but this logo is made up of multiple pieces and different animations. I'll show you how it was put together. Let's take a look at the timing panel. That's a good place to start if you want to figure out how an animation was put together. First, we have the top bar and the bottom bar coming in, except they're actually hide boxes that are flying out.

Remember, we can double-click on items in the timing panel and they'll be selected on our page. So, these two boxes fly out together. They're linked in the timing panel. Then, our text, World and News come in together along with the globe illustration. But they're actually set on slightly different durations here, which I'll show you in a moment. Now, I'm gonna turn to the next page of this file, which isn't animated. First, we're gonna talk about the green bars that grow into place.

There are, as I mentioned, some reveal bars here that are going to move away to show the green bars. You might wonder, "Why don't we "just scale these green bars?" Well, let me show you a little problem that exists when we do that. I'm gonna actually lock my text and then I'll click on the green bar there. Gonna use our scaling trick. I'll leave the width at 100 percent, set the height to zero, set it to grow to its current appearance and then change the proxy orientation.

Now, I'm gonna preview it again and watch this right side of this curve when I preview it. It looks kind of strange. And any time we have a curve in a line, it's really not the best result to use our scaling trick. So, I'm gonna remove that animation by clicking the little trash can icon here and turn our reveal bars back on. I'll lock the text bar layer and now we want these reveal bars to move away. We could use scaling, but I've found in this particular example it worked a little better to have these bars move off the text.

They move very smoothly an it's easy to control the timing. So, I'm gonna create a custom motion path that's actually going to take these off the page a little bit. I'm using Command or Control and the hyphen key to zoom back a little bit and I'm going to get the line tool, and I'm going to start in about the middle of this logo and just hold down the Shift key and go off the page. Now I'll Shift-click and select our reveal box and in the animation panel, I'm gonna make that a motion path. The motion path moves over to the center of this reveal bar.

Now, I want the length of the motion path to be the same for this bottom block of text. So I'm actually going to copy this motion path, Command or Control C, and just paste it. However, remember that line is going up. I want this line to go down. So before I convert it to a motion path, I'm gonna go to the Object menu, to the Paths command and Reverse the path. Now, I can just select the reveal box and make that a motion path. And again, it jumps to the middle of the frame starting at the beginning of the motion path line.

So these two are the same. Next, on both of them, I want to make sure that after they animate, after they move off of the green bars, that they're going to go away. And finally, I'll link them in the timing panel so they play together. Let's take a look. Before I play these, I'm going to turn off my text and my globe so that they don't interfere with what we're watching. Let's preview this. Looks great, very smooth transition.

If I want to make them move faster, I can simply lower the duration of these reveal boxes in the animation panel. Now I'm gonna turn on the rest of our objects here. Unlock everything by holding down the Option or the Alt key, and next we'll set our text animation. I'm going to lock everything but the text layer And now we'll click on World and News. In this case, I want them both to fade in. So, I'm gonna choose the Fade In preset, I can select them both at once, but I want them to fade in a little bit slowly.

I'm gonna set the duration to two seconds. For the globe, which I will unlock here, I want it to fade in as well. So I'll use the preset, but I'm gonna leave it at one second. I'll tell you why in just a moment. Finally, I'll got to the timing panel and I'll set these three to Play Together. I set the globe to a lower duration because I want it to be all the way in by the time World and News finish fading in.

Let's take a look. Perfect. So there you have the World News logo. Custom motion paths, different fade ins and linking objects in the timing panel all play together to make it work.