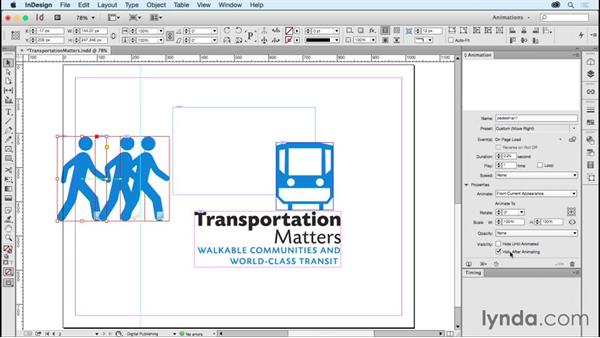 - Some logos beg for animation more than others, and certainly a logo related to walking and transportation fall into that category. Let's take a look. "Transportation Matters." There's a series of several sequenced animations going on here. I'll show you exactly how this was set up. First, let's look at the Timing panel. We have the first pedestrian, the second pedestrian, and the third one. Then we have a rectangle that's going to scale to reveal our logo.

The bus comes in, and then the text. Let me show you the details. I'm going to go to the next page of this file which has no animation applied. First, let's look at our pedestrians. We have one, two, and three. And actually, numbers one and three are identical. Number two's in a different position. We're gonna use them together to simulate the sense of movement. I want each of these to move right. I could use a custom motion path, but I'm actually gonna start with the preset "Move Right." I'm then gonna adjust the motion path by clicking on it, and I'm gonna bring this motion path from the first pedestrian to about the middle of the second pedestrian.

I'll click on the second pedestrian, and set that to "Move Right." And again, I'm gonna move this to about the middle of the third pedestrian. The third pedestrian I'll set to "Move Right." I'm gonna set him to just the edge of this building here, or what is a building underneath this hiding box. Now I'm going to set all of these to the same duration, which is going to be a quarter of a second, .25 seconds. I want it to happen pretty quickly.

Now, the next step is we want our building logo to reveal. We have a reveal rectangle here that's going to scale to the right and show the building. We could scale the building out, but because the lines aren't exactly straight, it looks a little odd, so we're using this reveal triangle instead. I'll select this triangle, and I'm gonna set it to scale with the width going from 100% to zero.

And we're going to have it scale to the right-hand side. Let's take a look. Perfect. For the bus, which we want to come in next, we're gonna use the preset "Fade In." Then for the text, I did something a little different here, 'cause I thought it looked pretty good with this. I'm gonna do some non-proportional scaling here. I'll leave the width at 100%, but I'll set the height to zero.

And I want it to grow from that to the current appearance, and I let it stay with the proxy orientation in the center so that the text appears to grow from the center out. I thought that worked pretty well here. I do want it to happen rather quickly though, so I'll set this to a quarter of a second. Let's check out our logo. Great. That's just what I wanted. So motion paths, fade in, and scaling help bring this logo movement.

And it almost tells a story. Very appropriate for a "Transportation Matters" logo. Don't you think?