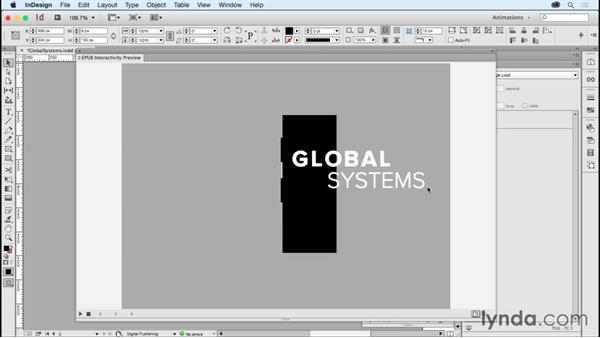 - Few things are more important to your corporate identity than your company logo or mark. Animating your logo can be a really effective way of presenting your brand. We're going to take a look at the logo for my imaginary company, Global Systems. I'll show it to you in the preview panel. The mark itself is good, and quite strong I think. But it really has an impact when animated. Let's take a look at how this was set up. First, we'll check out the timing panel.

This'll tell us what order things are really animating in. First, we have some boxes that are actually going to move to reveal the white line that appears to grow. Then, each letter of the word "Global" comes in, followed by the word "Systems", and then finally, the logo is animated. Now, let's put it together. I'm gonna turn to the second page of this file, and I've put the layers panel here because we'll be using that a lot during this exercise.

I've also made a special background layer that changes the background to gray, just while we're working on this, and so you can see a little bit more clearly what I'm doing. The first animation in this logo is that this white line draws itself. It draws itself because we have these two reveal boxes that cover it. In order to make the line draw we're going to have each of these boxes scale back from the center. So I'll click on the top one, I'll set the width to 100, and the height to zero.

We want this frame to grow from its current appearance to basically nothing. So I'm gonna leave it at from current appearance. And we'll have it animate to the top edge here. I'm gonna do the same settings on the bottom. But this one will animate down from the bottom. Finally, I'm going to link them together in the timing panel because I want them to scale simultaneously. Let's see if this is set up properly. And yes, you can see the white line growing there. Good.

Next, we're going to have our text from the word "Global" come in. I'm gonna select each letter in order, because I'm gonna set the animation all at once and the order I click in determines the order of the animation. I'm going to set all these letters to appear. I'm gonna lower the duration. I want them to come in as quickly as possible, so I'll lower them to the minimum duration, .125 second. I'm gonna remove the opacity from them, and in order for them to come in properly because they're animating so quickly, I'm gonna set them to hide until animated so they'll come in when they're supposed to.

Let's see how we're doing. Our line draws and our type comes in. Perfect. For the word "Systems", I'm just going to use the preset appear. The last step is to have the logo move out. I'm gonna lock all the layers except for the logo layer by holding down the opt or alt key, and I want to show you that we have a box that hides this logo. I'm gonna select the logo and I want it to move left. Now, that's gonna have it move too far over.

If I turn on my animation proxy I can see that it's too far to the left. So I'm gonna just click on the motion path, and bring it back and then check my proxy. Maybe that's a tad close, just a little adjustment this way. There, that looks good. And now I'll turn back on my hiding box. I can't just use hide until animated on this move because it animates from this location, so it's gonna become visible the moment it starts moving. That's why I have to put this box here.

Let's turn off our gray background, and let's check it out. Great, I like that a lot. We've got lines drawing, type typing, and graphics going places. All the ingredient necessary for a globally appealing animation.