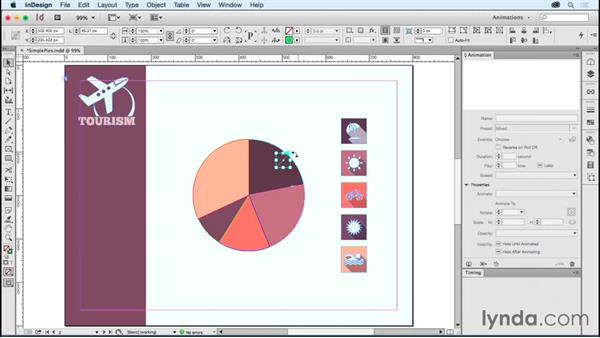 - One of the most common, and dare I say beloved, charts has to be the pie chart. There are several different, simple animations you can apply to pie charts that will make them a lot more interesting to your audience. All the techniques we're gonna look at in this video assume that each wedge in your chart is separate. One very easy way to create pie charts with separate wedges is to create them in Illustrator using the Pie Graph Tool, then, instead of placing the pie, copy it and paste it into InDesign, then you can ungroup the pie and you'll have separate wedges for each wedge, just as we have here.

That's the starting point. When it comes to animation on pie charts just about the easiest effect that you can add is a simple fade in for each wedge. Let's Preview this. Wedge one, two, three, four, five. In this case I simply selected the wedges in the order that I wanted them to animate and applied Fade In. Each wedge is named correctly, so I can easily tell in the Timing panel that they're in the correct order.

So it doesn't get much simpler than that. I'm gonna turn to the next page and show you another simple effect you can do. Let's look at it in the Preview panel. In this case we have wedges flying away from the center if we want to emphasize one part of the pie. I'm gonna remove the animation from these wedges and show you how to do one of them. We'll just have one exploding wedge from this pie. Select all the wedges and remove the animation by clicking on the little trash can here, and now let's animate this wedge. In order to do this we need a custom motion path.

I'm gonna select the Line Tool, and then in the center of the wedge, sort of right in the middle of it, I'm gonna draw a line from the center out to the edge, a short line. And then I'll select that, along with the pie wedge and make that a motion path by clicking on the Convert to motion path icon. There we go, let's Preview it. Out comes the wedge. If that's coming out a little bit too far of course I can click on this motion path and edit it.

I could also have the legend animating in some way for each wedge if I wanted to. For example, I could have this fading in, and then just link it in the Timing panel with the wedge moving out. Lots of possibilities here. Let's look at our next example. In this example we have kind of the opposite effect. Instead of exploding pie wedges, we have imploding pie wedges. So that's a technique that you might wanna do. I'll show you how it's done. In this case I'm going to just remove the animation from one wedge.

And to make this a little easier to work with I'm going to isolate this layer. Each wedge has been put in a separate layer. And I'm gonna hold down the opt or alt key and click on the lock field here, which locks all of the wedges except for this one. Now we want this to move out and fade in as it moves out. So again, I'm gonna draw a motion path. This time I'm gonna draw it in the opposite direction, because we're going to use a To Current Appearance setting in this and as you may recall from other videos To Current Appearance is sort of the Alice in Wonderland Through the Looking Glass effect and everything's the opposite of what you think it should be.

I'll take a look in the Preview panel and these are the wedges that were already animated. Let's see how our wedge does. Perfect. It fades in and moves to the center. Again, we could link each of these wedges to its legend and have them animate together, or we could just show part of the pie by only fading in and moving some or one of the wedges. Lots of options with this basic technique. These are a few simple things you can do to animate pie charts. From using simple Fade In, to motion paths for exploding and imploding.

And all of these effects will make your pie charts all the more delicious.