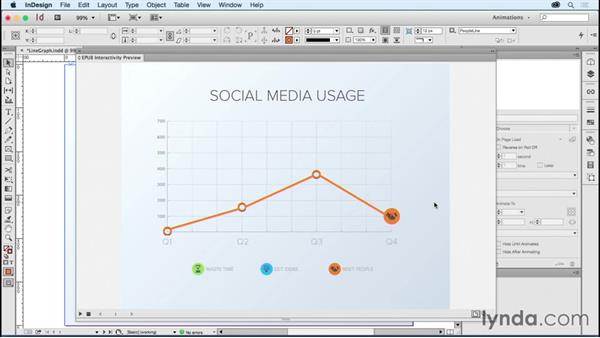 - One of the most common types of charts and graphs are line graphs, or line charts, which can easily be created in Excel, or even Adobe Illustrator. But only InDesign can make them move and engage, with movement from animations. There are a couple of different techniques you can use, both of which, of course, involve drawing lines. Let's take a look at the first technique. I'll show you this animation in the Preview panel. Each data point comes in, along with its legend, and it plots out the line graph for social media usage.

Let me show you how this was done. I'm gonna hide a couple of these lines, and just focus on the one on the bottom. I'll select it, and I'll remove the animation and then show you how it was done. Notice that this line doesn't have any rotation applied to it. That's because I drew it at an angle, like this. When we draw diagonal lines that way, as I discussed in another video, if we try to use our little line-drawing scaling trick, which is to set the width to zero, and the height to 100% with a change in the orientation point, and setting it to current appearance.

When I try that, which works for certain types of lines, it doesn't work for this at all. When we have this kind of diagonal line, one that we've drawn diagonally to begin with, we have to use a slightly different setting. In this case, I can't have it scale non-proportionally. I'm going to have to have it scale from zero, in both width and height. That's because it's at this angle. So I'm gonna set this to 0% width and height to start with.

I'll have it animate to the current appearance, and then I have to change the animation proxy to the corner that it draws from. Now, the line won't always draw from a corner neatly, but I need to select the closest point. So I'll click in this lower left-hand corner here. I'll go ahead and do this for the other lines. I'll shift-click and select them both, and set them to zero width and height, to current appearance. I can set these scaling values on all the lines at once, but I have to set the orientation point individually.

This one, again, would probably do best animating from this corner, but this line is gonna want to animate from this upper-left corner. Now, let's take a look. Notice how the lines are actually scaling in both the width and height. There's kind of a distortion here. The question is, do you notice it? Did you notice it when I played this preview earlier? If you didn't, then this technique is probably the easier of the two, and it's fine to use.

If you don't like that distortion, there's another technique that we can use. It takes a little more time, but I think it gives cleaner results. I'll turn to the second page of this file, and let's turn our other lines back on now. Now I'll show it to you in the Preview panel. These lines are not distorting. They are extending their length without the width being altered.

Let me show you how these were done. In this case, I first drew a horizontal line. Then, I rotated that line to the correct angle. Notice when I do that, I have a rotation value in the Rotation field, here on the control panel. So, this process can take a little bit longer because you start with horizontal lines and then you need to rotate each one to the correct angle. If you paste a line graph from Illustrator, those lines are already rotated, and you're gonna have to, basically, re-do all those lines using this technique, if this is the technique you prefer.

So this line is rotated, and once it is, I can now go in to all of these lines at once, and I can set each one of them to a width of zero, growing to a height of 100% to the current appearance, and I can set the proxy to be the same on all of them. So this takes a little bit more time, but, again, I think it gives a cleaner result. The last thing I want to mention with these line graphs, is timing. You'll notice that each of the lines on this graph drew out one-by-one. But we can change that timing. I'm gonna go to the next page of this file, and we'll preview it.

In this example, all the lines draw simultaneously. We used our distortion technique, but regardless of the line-drawing technique you use the Timing panel is the same. In this case, we have all of the legends, first legend, and all of the first circles coming in at the same time. They're all linked together here. Then, we've linked all of the lines, so they draw at the same time. The basic line-drawing technique isn't different, it's just a question of how we arrange the Timing panel.

Let's face it, line graphs can sometimes be a little boring. But with simple scaling animation, and strategic use of the Timing panel, you can really make them a lot more interesting and wake up your audience at the same time.