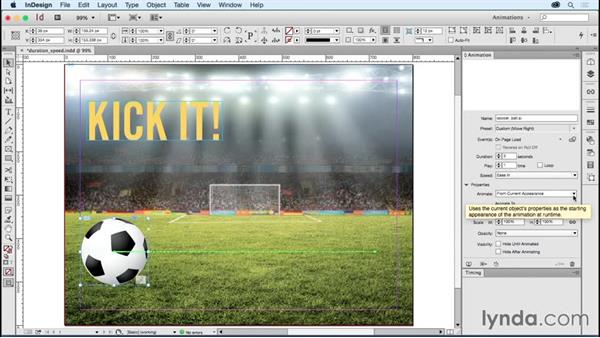 I've applied the animation preset Move Right to our soccer ball here. It has all the default settings, but I want the motion path to be a little longer so I'm gonna modify it. This green line is the motion path and I'm going to click on it and then I'm just gonna grab one end of it, so that the ball moves a little bit further along the field. Let's take a look at what this looks like with the default duration of one second. I'm going to open the EPUB Interactivity Preview panel using the keyboard shortcut Shift, Option, or Alt, and Return.

The shorter a duration, the faster something will happen. The longer, the slower it will take to happen. Let's take a look at speed or easing now. When you set a motion path, you actually also set an easing path. I'm gonna zoom in just a little bit here and you can see that there are dots on this motion path. That's the easing path. Currently, the speed or easing is set to none and all the dots are spaced equally apart.

I'm going to change this and use the setting Ease In. Ease In means that the animation will start slowly and then speed up. If we look at our line here, you can see the dots are really close together at the beginning. The closer the dots, the slower the animation will be. It's sort of like every dot slows it down. Then as the animation speeds up, the dots are further apart. Let's see what that looks like. The ball starts moving very slowly and then it speeds up at the end.

That's Ease In. The reverse of that is Ease Out and here you can see the dots are spaced apart at the beginning and then they're closer together at the end and we're gonna see the reverse action. The ball start out fast and then it slows down. The other option we have here is Ease In and Out and we can see from the dots on the easing path, that this is gonna start out faster, slow down, and then speed up again.

Slows down and speeds up. So, this setting is called Speed, but it's really about easing. It's not movement in pixels per second. I like to think of it as setting the deceleration and acceleration of an animation as it occurs. In addition to duration and speed, we can also set an animation to play multiple times. I'll set this to play two times. Let's take a look at that. The ball goes across the field once complete and then very quickly starts again.

Notice there's no delay in each time the animation plays. That's actually something that's kind of tricky because when you loop something, which we can also do by checking this box here, it basically plays over and over indefinitely and there is no gap between the time that an animation finishes and when it starts to loop. There are quite a number of tricks that we have to do to work around this that we'll take a look at in a different video. Of course, there are other settings that affect the speed of an animation including those in the Timing panel, but in the Animation panel itself, duration and speed or easing are the place to start controlling the timing of your animations.

Remember, timing is everything.