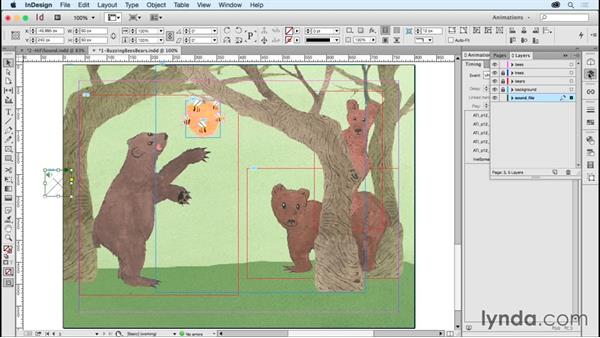 - Animations are fun to watch. But they can be even more compelling when sound is added. Let's look, I mean, look and listen, to a simple example with a sound effect added. (bees buzzing) Buzzing bees. Sound really brings it to life, doesn't it? Let me show you the ins and outs of adding a sound file. I'm gonna turn to the second page of this file. My bees are still animated. They're on a custom motion path. And they're set to Play on Page Load.

If we look at the timing panel, they're all linked, and will play at the same time. Now let's add our sound file. I'm gonna use the Place command, just like I would for an image. And we'll place the sound file initially on the Paste board. In order for the sound file to actually play, it has to be touching the page somewhere. So I'm gonna move it over just a little bit. I don't really want it to show. I do want it to play. Now, we want it to play on page load, so I'm gonna open the Media panel.

And there I have a setting to Play on Page Load. Let's take a look. My bees start buzzing, (animation is silent) but there's no sound yet. That's one problem. (bees start buzzing) Hm. There is the sound. And the other problem is, I have a little bit of what's actually the sound file trying to show a controller here. Let's fix both of those problems. In order to have the sound file not show a controller, there are a couple of different ways you can fix it. One way is to make this frame one pixel by one pixel, so it's so small you can't see it.

But I don't really prefer that method because I like to be able to see the sound file and select it if I need to. Instead, what I like to do is hide it. Here is our sound file, and it's on the very top layer. I'm gonna drag it down to the bottom layer, where I already have a sound file layer prepared. And now it's underneath everything else and it won't show. The reason it played after the bees animated is because that's how it's set up in the timing panel. It was the last animation I added, and so it's at the bottom of the panel.

In order to get it to play while the bees animate, I need to simply make it part of the linked group. So I'll just select it and drag it in. Now let's check it out. (bees buzzing) Perfect. All we need to do is set the sound file to Play on Page Load and make sure that it's not visible on the page. But what if we want to use some other trigger event? How do we set that up? Well, let's take a look. I'm gonna turn to the next page of this file.

And here, I have my bees animated. But I don't have any start event for them yet. If we look at the timing panel, the event is, so far, unassigned. What I wanna do with my animated bees and the sound file is, have them play on page click. So let's import the sound file. I'm gonna use command or control d to place the sound file again. I'll put it over on the Paste board, make sure it's touching the page. I do need to make sure that it's not visible. So I'm gonna bring it down to that bottom layer, the sound file layer.

Now, here's the thing: the only way I can trigger a sound is one of two ways. I can either trigger it in the Media panel. But the only option I have there is to Play on Page Load. The other way that I can trigger a sound file is to use a button. So if I have animations that are triggered by buttons, I can just add the sound file to that. But this I want to be on page click. So I have to trick InDesign a little bit. And what we're going to actually do is, create a large button that covers the whole page.

And that way, when it's clicked on, it will appear to be triggering on page load. Here's what I mean. I'm gonna go to the top layer of this file and I'm going to draw ... There we go. And now I'm gonna make it a button. The first action that I'll assign is to play the sound. Next, I'm gonna select all of my bees. I'll do that in the Layers panel.

And with them all selected, I'm gonna go to the Animation panel and choose the button trigger. So I'll click on this icon, and then I'm just gonna click on the giant button that I have across the page. These animations are added to the button action. In the Timing panel, I see everything that this button is triggering. And what I need to do here is link them all together. Now let's try it out. In the Preview panel, nothing's going to happen on page load. But when I go on page click, (bees buzzing) our bees are buzzing.

The button trick works pretty well. And you can either use the buttons as actual buttons that trigger a sound, or you can use this little trick to make it seem that the sound is being triggered on page load. There's one other example I wanna show you, and one other issue. I'm gonna switch to another file here. And let's play this animation in the Preview panel. It's a fairly complex animation, as you'll see. The sound bars are moving, the record spins, and the arm comes over. (record scratches, then instrumental jazz starts playing) Pretty neat, huh? The issue I wanted to bring up here has to do with complex animations.

You can see from the timing panel that there's quite a lot going on here. We have a couple of knobs moving up and down, we have the record start to spin, we have the volume knob moving. And then we have the record arm moving. So in this case, we placed the sound file, it's on its own layer. If we isolate the audio layer and select it, it's just a very small piece over here in the corner. But the key thing is, in the Timing panel, we had to put it in the right position. We wanted the sound to start after the arm on the record player moved over to the record.

So we had to position it correctly in the Timing panel. And then it plays as it should. Using sound with animations is pretty easy, really. And it can add so much life to your project. Sounds like a good idea, doesn't it?