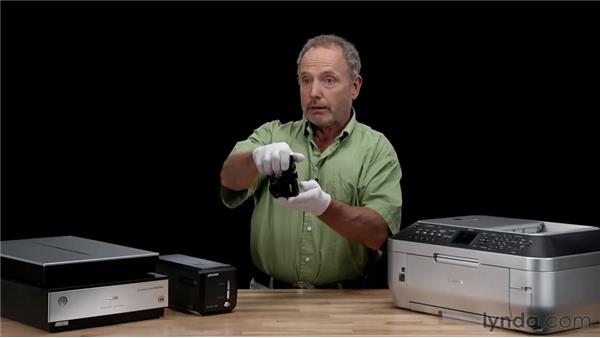 Let's begin our discussion of scanners by comparing them with the technology that is perhaps more familiar, a digital camera. For many people scanners are these kind of mysterious black boxes that you open up, you put in your image or your document, you close it, you click the Auto button, you are not quite sure what's going to come out the other end. There is a good historical reason for this. Prior to the digital age, cameras and scanners had very different technologies, in fact the imaging product they created were very, very different. But with the development and evolution of digital imaging technology cameras and scanners really have blended right together, they really work very much the same now.

Both capture and digitize subjects, both create pixel-based images. Now of course there is some packaging differences between them. A digital camera, you can pretty much tell that from across the room. scanners, not so much. This is obviously kind of a scanner particularly when you open it up, but this, not sure what that is, and this, is this a scanner, is it a fax machine, is it a printer? Well lo and behold, it's all three. So there are some packaging differences between the two and there are also some differences in terms of what we use them for in terms of capturing. Typically, digital cameras we used these for capturing live 3D images, and it tend to work in a single shot, click, you take the picture all at one time.

Now there is also some handling differences. With a digital camera we can hold it in our hands, we can put it on the tripod, we can change the position. Scanners tend to be more static environment, which is actually a good thing. It means it's easier for us to capture images because they are flat all the time, very static. Now there are some control options differences as well. With digital cameras we control things like shutter speed and focal length, and f-stop, there is perspective changes and of course enormous lighting changes in a digital camera environment. We don't have any of those. This is a much more consistent environment when we work with a scanner.

This means that things are actually easier with a scanner in a lot of ways. And I know what you creative people are thinking. I want creative control of my artwork. Well, I promise you two things, one, we'll show you how to do plenty of creative things with your scanner, and I promise you that in the post-scan I will show you how you can capture images with your scanner and you can have your creative way with them in your digital imaging editing program such as Photoshop or Photoshop Elements. So choose your digital weapon. If you are capturing three-dimensional scene, digital camera is going to be your weapon. If you are doing more two-dimensional static art, such as a photograph, then the scanner is what you are going to be using.

It's nice to have both and to have facility to control both. On our course we are going to be focusing on two-dimensional line art graphics, photographs, and scanning and processing documents.

10/11/2011
Review the scanning techniques graphics professionals and photographers use, while delving into workflow considerations and the advanced image-quality controls available in most scanning software. Author Taz Tally explains the core concepts, such as how resolution and interpolation affect scans; introduces the industry-standard SilverFast scanning software; and shares the settings to achieve the best results from a scan. The course also covers keeping your scanner and its parts clean and free of dust, and includes a variety of start-to-finish scanning tasks.
Topics include: