Using typography in your design 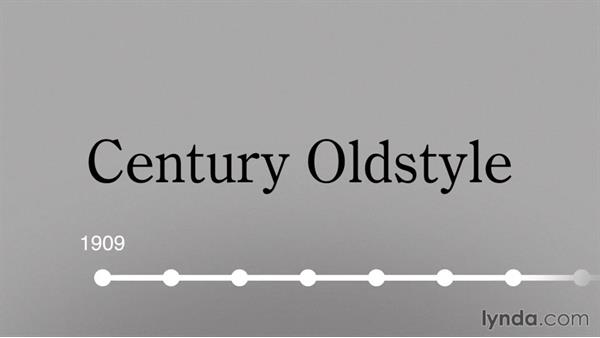 - Every project has different kinds of information, and you'll almost always find that one kind supports another. It's not that one is necessarily more important, but the story works better if it's first in the sequence and most prominent. To do this typographically, you need two typefaces with contrast that compliment each other. You almost never need more. Type is voice; the more voices you have, the more nuanced your messaging becomes, which gets exponentially more difficult to do well.

The good news is that two typefaces, sometimes just one, will handle 90% of your projects beautifully. First rule is to avoid extremes: super-bold, super-light, super-big, super-small, flamboyant, stylized, whatever. You laugh, but you'd be surprised at how tempting it could be to make choices like these.

What you want is medium: medium proportions, medium stroke-weight differences, medium x-height, medium counters, not too tightly set, not too loosely set, and so on. Even small quirks that impart a style, they can be beautiful, they can be interesting, but they can get cloying to read pretty fast.

It's kind of like too much candy. Better is to think of a paperback book. That text is about what we want. A lot of faces will work, but our pick in this case for a primary typeface is Century Oldstyle. It's basic, it's strong, it's super-legible. No quirks, medium stroke-weights, strong serifs, nothing pretentious or affected here.

I'd say it's good looking, but not beautiful. It looks like text and will feel familiar. Century Oldstyle also withstands trends. It was designed 100 years ago. It has a long, productive history. By way of comparison, the before is set in the typeface Myriad. Myriad is a young typeface designed in the 1990s, and it's great, it has many excellent attributes. I'd even say first-in-class attributes, like legibility, but it's a sans-serif style.

Sans is a French word that means without, so it's without serifs, which means it's smooth, which is better suited to what I call the built, or mechanical environment, you know sleek, glossy, aluminum and glass stuff? Century Oldstyle feels unbuilt; its detail is toothy and textured and organic. Because Century is so normal, there are a lot faces that'll be a good compliment. We're looking for very high-contrast.

It's very bold, it's fairly square like Century, neither tall nor wide, its strokes have more thick and thin contrast than most sans serifs, it's more like a serif face in that regard, and this helps the two faces coordinate well. Here's something your friends won't know: if you look closely, you'll see different stroke weights within a Franklin character. Look at the left stem of the upper-case A. It's thinner than the right. This is more like a serif than a sans serif.

The stems of the upper-case M are all different, which is also more like a serif than a sans serif, so Franklin Gothic is a good match for Century. Complimentary letter forms, no quirks, no frills, good looking, but not beautiful, it has a lot of presence on the page, and is almost as legible as Myriad.

3/24/2015
Informational signs have two purposes: to report information and to make it appealing to visitors new and old. In this way, signs have much in common with other projects designers work on everyday: websites, brochures, posters, etc. In this course, John McWade, lynda.com senior author and publisher of Before & After magazine, is tasked with rebuilding a poorly designed sign for an Audubon-recognized bird-watching area in Seneca Falls, NY. He takes members through the deconstruction of his thought process (what information does this sign need to contain and how should it be laid out?) and then rebuilds both the content and the design. He first determines what images and information need reworking, and then with a basic set of design tools he reworks the copy, typography, imagery, and layout. Members will get an over-the-shoulder view as he determines the best way to showcase the sign's complex information in a compelling and eye-catching way.

Video: Using typography in your design