What is your focal point? 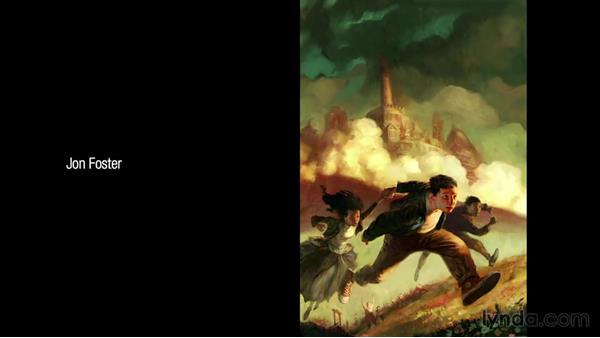 - If someone asks you, "What's your point?" when you're telling a story or explaining something, they want to know the main theme or reason for telling it. The same could be said of the focal point. An artist should identify the focal point, what the viewer should look at first, based on what is most important for the viewer to understand in an illustration. Understanding what your point of focus should be and why will help decision making for directing the viewer's attention. In an image that tells a story, it might be most important to identify a main character as the first point of focus.

In this illustration, color saturation brings our attention first to what we can assume is the main character in the scene. And here we understand the main focus is accomplished by providing contrast of cool against a sea of warm color. This image uses a high contrast of value to accomplish the same goal. A vibrating, complimentary relationship can draw the attention to the face, as well. The main character's facial expression is important for expressing the story and idea in this piece.

Notice how we look between these two focal points because of the color usage. It's critical for conveying meaning. Contrasting textures can also lead the eye to the point of focus, either in black and white or color. The focal point in images that tell stories might alternatively be on the key moment of an event, as well as an important character. Contrast moves our eyes first to the pivotal moment of action and expression here. With conceptual illustration that is focused more on an idea than an event, the focal point should be something that helps to communicate the idea with clarity.

The point of focus here is about a key piece of information that creates a clear understanding of the image's meaning. The main concept is about the juxtaposition of contrasting elements. A woman, as a birch tree, releasing herself from the forest with the ax. Using contrast of saturation, value and light in this composition communicates the idea and helps to move the viewer from focal point, the ax, to other important information in the image.

The direction of the three points of interests is triangular and keeps the viewer in the scene, starting with the focal point. In any image, the focal point is established by using the highest level of contrast to get the viewer to look at something in the illustration that's deemed most important. Knowing what you're trying to say in your illustration and understanding all the ways to create contrast will guide you to the best possible focal point in your piece and provide the greatest clarity for expressing yourself. With a story or an illustration, you never want the listener or viewer to be asking, "What's your point?" If they do, you know you haven't been expressing yourself clearly to them.

And as an illustrator that is, of course, the point.

3/13/2015
Understanding how to arrange the elements of a composition is critical to a successful final piece. Like the skeleton of a creature, composition is the foundation on which everything else rests.

This course will help to clarify best practices for developing any artistic or illustrated composition. Shaping the elements; marrying concept to composition; engaging the editing eye; achieving balance, unity, directional movement, and perspective; and exploring point of view and focal points are all topics covered in these lessons. Author (and professional artist) Mary Jane Begin also explores the major and minor pitfalls of a weak composition and explains the six compositional rules that lead to the best end results! See the steps in action in the final chapter, where Mary Jane designs a concept for lynda.com.

Then share what you've learned with the lynda.com community. Take the three challenges Mary Jane issues in the course and post your results to Facebook and Twitter, using the hashtag #learnatlynda. We can't wait to see your illustrations!
Topics include:

Video: What is your focal point?