Framing your field of view 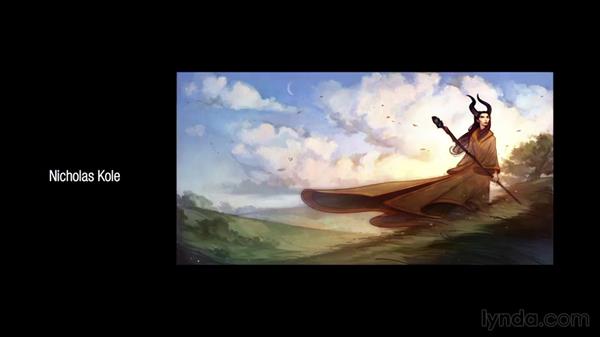 One of the first decisions you'll need to make when creating an illustration is how to frame your image. The frame is the edge where the illustration ends. Will it be a square or rectangle? Vertical or horizontal? Have a hard edge or a border? Have a softer vignette edge? Silhouette against the page or bleed off the edges? These decisions are best made at the initial sketch stage, and often in the form of thumbnail sketches. When a former student of mine and RISD graduate, Nick Kole, was asked to do some test illustrations for a chapter book featuring Disney's "Curse of Maleficent", the first step was paring down his ideas.

He accomplished this by making rough thumbnails that are drawn with a dull pencil and are only half an inch high. His focus is mainly on shape and format using both vertical and horizontal framing. Capturing the essence of the character's mood helped to identify the mood of the overall image. In this first example, he focused on the shape of the outstretched arm recognizing that the horizontal composition helped to emphasize the pose more than the vertical one, giving room for imagery in the cape.

The final rough sketches and color studies were compelling, but the client wanted a more literal scene. In other words, less concept, more storytelling. In this image, Nick started with a vignette, then shifted to a horizontal format to reinforce the sweeping gesture of the cape. The mood portrayed by Maleficent is one of hopefulness and adventure, reinforced by the panoramic scene behind her. Although the panoramic view of the character's gesture, landscape, and format nicely compliment one another, Nick tried a few other versions, this time discovering that the vertical framing of the view worked better than the horizontal, because it emphasized and reinforced the dramatic and triumphant pose.

It's an appealing image but wasn't yet fitting the expression and personality that he had in mind. In this last image, Nick captured the pensive mood of the character in the composition by focusing on her isolation in the center of the picture. The open space is flanked by trees that frame the character, and the horizontal shape allows for a diagonal and active band of light that creates movement for the centralized composition. The final image marries color, light, and composition in a wonderfully harmonious balance, communicating the character's mood, personality, and expression.

This piece landed the book deal. If you'd like to read more about his process, check out his website and blog listed here. Starting with the core mood or expression of your image informs decisions about your format and framing. Does the idea suggest a tight frame, or openness? An image flowing forever beyond the printed edge in a bleed, or safely held in the border? Using a format that follows the gesture of a figure in a scene can reinforce the mood you're trying to capture, and trying different solutions before settling on one helps to identify what's working best.

Ultimately, the way that an illustration is framed should work in harmony with the color palette, style, and medium to express your intention. When all the parts come together as one voice, the illustration sings to its audience.

3/13/2015
Understanding how to arrange the elements of a composition is critical to a successful final piece. Like the skeleton of a creature, composition is the foundation on which everything else rests.

This course will help to clarify best practices for developing any artistic or illustrated composition. Shaping the elements; marrying concept to composition; engaging the editing eye; achieving balance, unity, directional movement, and perspective; and exploring point of view and focal points are all topics covered in these lessons. Author (and professional artist) Mary Jane Begin also explores the major and minor pitfalls of a weak composition and explains the six compositional rules that lead to the best end results! See the steps in action in the final chapter, where Mary Jane designs a concept for lynda.com.

Then share what you've learned with the lynda.com community. Take the three challenges Mary Jane issues in the course and post your results to Facebook and Twitter, using the hashtag #learnatlynda. We can't wait to see your illustrations!
Topics include:

Video: Framing your field of view