Painting and Developing a Composition 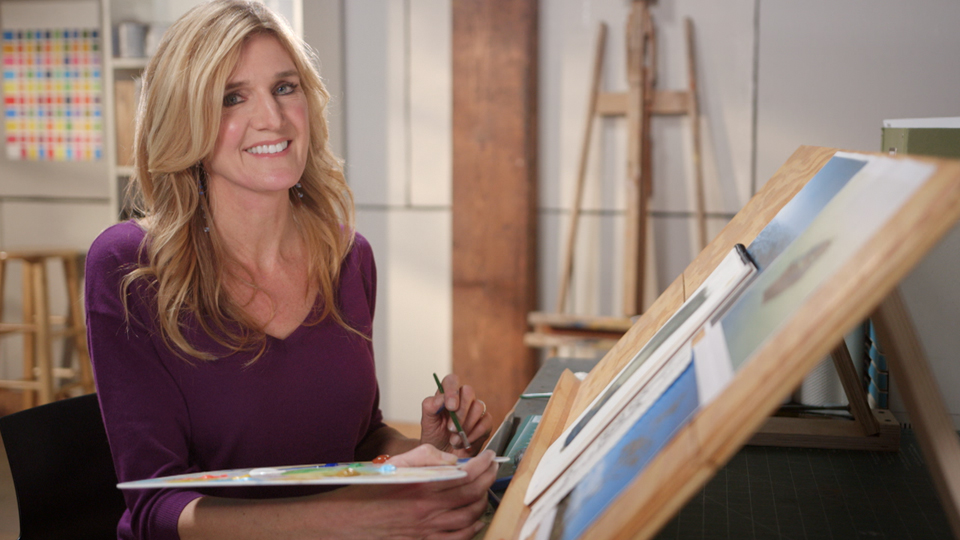 5/20/2015
We asked illustrator Mary Jane Begin to create a brand-new composition from three (surprise) elements. The goal? To teach members how to think about composition in terms of visual interest and implied story. In these videos, Mary Jane creates thumbnail sketches to conceptualize the layout and chooses the thumbnail that best communicates the message. She then translates that thumbnail into a larger sketch and uses color and texture to pull together a composition suitable for showing to a client or using as the basis for a final painting or illustration. These lessons show how an artist works on her feet, and puts concepts such as the rules of thirds, negative space, and drawing from reference materials into a real-world context.

- Hi, I'm Mary Jane Begin, professor, author and illustrator and I've been asked by lynda.com to create an image out of three elements that they've just introduced to me and compose a picture that either tells a story or explains some kind of idea. So, not having looked at these before, I'm not sure exactly what to do so I'll start with what I usually do which is to thumbnail. I'll do some really simple sketches that are small and give me a sense of where I should put things.

I have a boat, I have water, I have a tree. Where do I put each thing? I'm starting with the water because I'm thinking about that as being at the base of the image and I'm thinking well what if the boat is in the water and the tree is in the background? That's where I'm starting. And the tree is a really great shape. This seems really boring to me though. So like, here's my boat, here's my water.

No. Now the thing that I have to think about is I can play with the framework of the shape. It doesn't have to be square, it doesn't have to be rectangle. They didn't give me that parameter. So what if I go in a horizontal band? I'm also looking at a boat that I'm looking down into and that's my point of reference so I sort of have to think about the perspective of the boat as a guideline for my point of view. When I thumbnail I tend to thing about shapes and value first before anything else because it helps me to think simply.

I love the fact that this boat has no one in it and yet it looks like the oars are up as though it was just rode recently. So that's a really cool thing and for me that sort of starts to tell a story. I start to think about who was just in that boat? Anybody? Is the boat rowing itself? I don't know. What about his tree? What's the story with the tree? It has a kind of personality and shape that's really interesting. It's very bare.

It almost looks like it's, I don't want to say dead, but it doesn't look like it's flourishing. What if the boat is sort of angling towards the tree somehow? Maybe make this composition a little taller? I'm also thinking about some compositional rules. Which is, in this case, a two-thirds rule, or the golden mean or the golden rule where you want an image to be broken in two thirds and a third as opposed to in half simply because it creates more visual interest.

So if I start to think about that, place my tree somewhere back here, maybe on a little island. Here's my boat. It starts to be a little more interesting. But I wanna play with another potential point of view or frame in point of view and push that boat a little more dramatically as though I'm above it like a bird, a bird's eye view, and see what that looks like. Now, a this point, I'm thumb-nailing so it's really just stream of consciousness.

I'm thinking and drawing but I'm doing more drawing that's helping me to think than really contemplating it. I'm sort of just seeing what happens as I play with these different elements. I also have, you know, this water has a kind of roughness to it so, what does that tell me? Where should I go with that? Again, I'm trying not to break up this space in half because that would be boring. But I'm at a certain point of view with this boat, if I play with it this way.

Maybe I'm casting a shadow. Maybe the boat is not even on the water. Maybe it's floating freely above the water. Suddenly when I do that, I'm taking this out of a place where it's necessarily realistic. And honestly when you have illustration clients often times, they throw various elements at you that you have to, you have to figure out what to do with them. And sometimes they don't make sense but you have to make sense of them.

Either conceptual sense or narrative sense. It's a challenge, that's what makes it interesting. So there's something about the boat hovering above the water that I really like. I kind of like this format but I'm gonna just keep playing with some thumbnails. What if I try a square? A square is a kind of safe format. It's harder to compose with than a long band horizontal or a tall vertical because there's not a lot of places to go.

You tend to land in the center. So if I choose a square, and I'm still looking at the direction of this boat, I like that. There's something about that that, that's sort of my key that I'm working with. I'm gonna try placing it, what if it is placed more in the center? What if I cut part of the boat off? What happens then? What if we don't see the back end? When you're thumb-nailing, you're trying to think of as many possible solutions as you can. You don't wanna just think of one way and then I'm done.

That's not interesting. So if I try, I liked that hovering of the boat above the water so I'm gonna leave that. Cast a little, kind of faux indication of a shadow and see what happens if the boat is cut off. But then I look at this and say, "Wait, there's a weird tangent here." So I'm gonna crop in a little more so it doesn't look like I'm cutting off the edge of the boat. That's never a good idea. You never want to cut things off right at the tip. It's called a tangent and it's not a good idea.

It draws attention outside the frame. It pulls you out of the picture. So what if I put the tree on the other side on an island, on this side. Well, the problem with that is, if the tree is over here and the boat is over here, there's nothing going on in this part of the composition so that doesn't work either for me. Let me go back to something I liked, which is this point of view.

Try another. I liked the idea of the square so I'm gonna try another version of that square. Here I'm also starting to think about, and this might be a weird thing, but what if I put the tree inside the boat? What if the tree is actually, as though it's riding the boat? Or growing out of the boat somehow. What would that be like? And this is just stream of consciousness.

I'm thinking things through, thinking about what is the story or idea that I want to tell? What does it mean? And so, that's just one potential concept. And I don't know if it's gonna work but it's, it's something that I'm thinking about. But then I start to think to myself, the austerity of that boat and how it might be wanting to get to that tree is the story that keeps rolling around in my head.

And this doesn't get there so I wanna go back to the core, which is the story. And I'm gonna do a few more thumbnails and see what I can come up with that speaks to that story. So I finished my thumbnails and I tried to work through a lot of different ways of thinking about what story I was trying to tell. And I started with the boat from the left going towards the tree, imagining the tree might be on a small island and the boat is trying to reach it.

And so I kept thumb-nailing that out with the boat on the left, stage left, heading to the right, which is the way Westerners read stories, so that made sense to me. I tried shifting and sketching the boat really large and making the tree small, far away, and for some reason it just wasn't working. And then I did this rough little sketch of the boat on a kind of tiny island with this tree and suddenly, I was like, "That's the story." When you choose a moment to tell, you often want to choose the right moment.

And it could be at the beginning of the action, the middle, or after somethings already happened. And so I wanted it to be where the boat's already landed and the boat and the tree are together. It's kind of a love story. So these are inanimate objects but for me as a storyteller, my compositions come out of wanting to explain the narrative. So what I'm gonna do is take this little tiny thumbnail and translate it to a larger sketch.