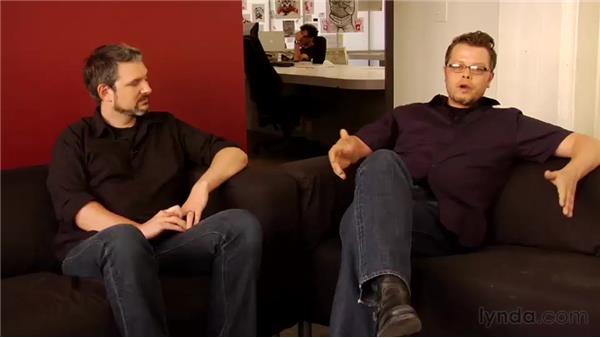 (Music playing) Male Speaker: At the moment, I am working in Flex. I am always going back and forth with Flash and Flex, and TextMate and all those programs. We created this environment where you can shoot flares into the sky and then I can click on the sky and those little particles follow your mouse and create nice little funky-colored Northern Lights.

Michael Lebowitz: In general, almost all of our new business, all our new business is inbound. We don't go out and search for things. So, a lead will come in, either through email, from our website or over the phone. Usually a producer will reach out and ask the questions that need to be asked, whether it's just basic stuff like timing and budget and such, like, or more nuanced questions about goals. Once we have enough of the answers to these questions, we run through a pretty short checklist of qualifications for whether it's a good project for us or not.

And those qualifications range all different categories. Does it provide us an opportunity to innovate? Is it going to make you money? And are you going to have a lot of fun doing it? We believe very firmly that people who find something truly interesting to themselves, in the projects that they're doing, are likely to do better work. And so, that's why we go out to everybody in the company and say, "Who is "interested in this topic?" That usually leads to more excitement and enthusiasm, which leads to more and better ideas.

Jason Prohaska: Obviously, if it's a new client, there are a lot of new things we need to learn about each other. So we'll go through, we being myself and the aligned producer and the strategists, to kind of figure out what some of the obstacles might be with some of the stakeholders, but we'll go through the contracting process and figure out the basic details of what we need and what they are going to need in order to allow our team to engage with them in a really healthy way. And then that moves through the natural process of initial concepts.

For the Grind House project we ended up having to go off-site and decided to go out up to the midtown, in Manhattan, where all the old theaters used to be and shooting stuff, in some cases going in some of these buildings, talking to people that would let us in so that we could shoot pictures. We had some people that were talking to friends of ours in Los Angeles that were going to look at some of the old Grind House theaters to get stuff for that. That will come together very quickly because most of the content, when we're doing something for an entertainment property, they won't really have any assets to provide us at all.

So, we'll have to create all of that stuff on our own, very quickly. That then goes into a rapid prototyping process where the design and the development pieces are coming together. But a lot of that initial discovery process that we try and engage with every single one of our clients helps inform what I think is a real fundamental principle about what we do. We're trying something new in every single case, for every single project we do. It's never been done before. That puts you into inherently unknown territory. Something that you haven't made before can't be measured or managed.

So we want something in two weeks, okay. Let's talk about what your objectives are. We'll see how that might measure against an iterative release of something that will get some awareness upfront about something, so that we can then start feeding in from multiple angles into that initial awareness, into that initial seed that we're planting. Michael: The reason that we speak really generally about this process is that the process is kept very loose and elastic because we do so many different kinds of projects.

We've done all of the motion graphics for every Jumbotron in Times Square, for New Year's, '06 to '07 for Target. They buy every Jumbotron in Times Square. It's a motion graphics project, but with these with huge-huge aspect ratios to work with. We do very, very rich immersive web-based experiences. So, what we have isn't so much a process per se as sort of a framework. And what we're describing is the framework, because it allows us to be able to very quickly, and with great agility, move between these types of projects.