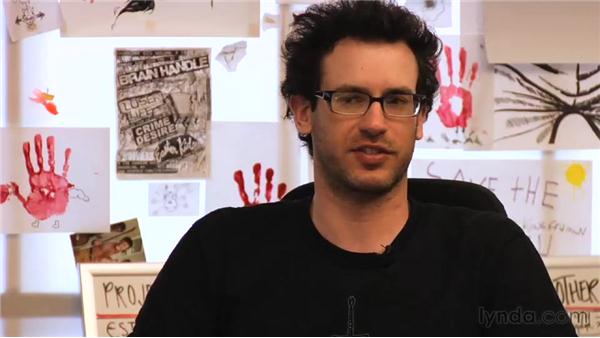 (Music playing) Michael Lebowitz: This is a team area. Currently, the team is hibernating, but the team is called Blood Turkey. That was the name of it, and you can see that all the team members made Hand Turkeys but we used fake blood. It was sort of like a blood brother, blood sister ritual. We recently reorganized the company from being all organized by discipline designers, developers, to being in cross disciplinary teams.

We did that partly because we're starting to see some moments where things were getting lost in communication between disciplines, and partly because of the insight of, when we were a small company, it was really easy to self-organize. And so if we create multiple sort of small units within, we can sort of, again, give them the autonomy they need to do things the way that's going to work best for that particular group of people.

So we sort of defined the make-up of a team and we put the teams together and then we sort of said, "Go! "You can figure everything else out from there. "You've got the tools and the staff that you need to do it" and so we asked them to come up with team names just so that we can have identifiers. We didn't want to have team one, two and three. So, they've just sort of have adopted these personality traits for their teams and sort of act accordingly. Joshua Hirsch: We used to be set up in this room by discipline, so designers sat together, developers sat together, producers sat together, strategists sat together.

Now, we sit by teams. Each team is made up of a couple of, an art director, a couple of designers, producers and developers and they all sit together and work together. None of the teams have specific specialties, and they're all of even strength, so if a client worries they are going to get like the B-team or the D-team, that doesn't happen. Every team is an A-team. I know one thing that I can say, for sure, that a lot of agencies still do is designers work in Photoshop and developers work in Flash, well, for Flash projects and that's entirely not the case here.

Our developers aren't just Flash guys. They don't do all the breakout and animation. It's not like they do everything in Flash. They're really writing a lot of code and really robust, like, high-level code, and the designers get into the animation, into Flash, and building files. So there is a lot of file sharing, which is complicated with these kinds of files. So that's another reason that having the kind of physical proximity of the teams is so important, because it's kind of a constant communication about what file needs what and how people work with things.

Zander Brimijoin: Ideas can come from anywhere and some of the best ideas that I've worked on have come from developers and interns as like little nuggets of possibilities of things that we could do. Tina Glengary: Basically, we float in between all the teams. So, the teams are made up of two producers, two designers, two developers. But for every project, either Ivan or myself will be on that project from start to finish.

So, we can't actually be on a team because there is a bunch of teams and two people but - Ivan Askwith: We've formed our own team, all of the floaters in the office who don't have a team to call their own. So our team consists of strategists and a 3D guy and - Tina Glengary: QA. Ivan Askwith: QA, and a copywriter, and we like it. We get the luxury actually of getting work with everybody in the office on a pretty regular basis. Joshua: It's one thing to talk about this process, this kind of flattened out process, but actually putting it into practice here and having the team set up really kind of formalizes that relationship amongst the team, and the physical proximity and knowing during the Comp phase, when the designers who are going to have visual explorations, the developers have that time to work on functionality explorations or other kind of interface explorations which really leads to the innovation Zander was talking about, where you get everybody involved in the ideas and the creation, right at the beginning.

Even though we have this more structured system now, the kind of organic nature of the place, I think is going to still be underneath everything. So, we'll figure it out when it happens.