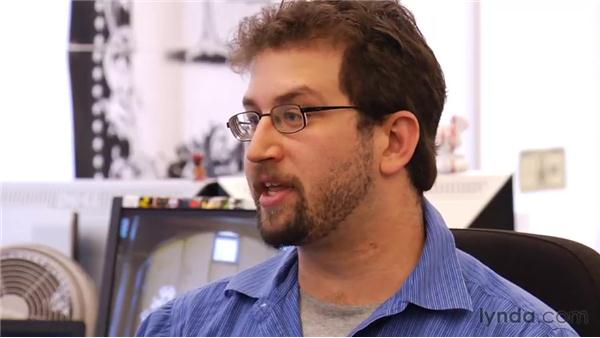 So it actually requires, even though it's already built, it require just as much time because we have just spend so much more time talking about it, really thinking through it every little detail, because games are so nuanced in the sense that they have to be balanced really, really carefully, or they won't be fun to play. So there are a lot of gatherings and walking people through user flow concepts and things like that. That's what going on here. Tina Glengary: People hear strategy and they immediately think, like, business strategy and our actual titles are Creative Strategist, which I think is very different.

We need to think about our client's goals and our client's needs, our client's business needs, but think about that in a creative way and help tell the stories that the other guys here in the shop make come real, become real. So I think a big part of the strategy here is more about touching emotions and reaching people than actual coming up with business strategies and things like that. Ivan Askwith: Yeah. I think a huge part of it is figuring out, like Tina said, what story we are trying to tell and then where the audience is going to fit into that and be anything other than just a passive audience.

We like to create stories that people not only listen to or watch, but can actually feel like they are a part of. Tina: A big part of our job is just sort of staying on top of trends and reading blogs and playing with other people sites. So, like, people don't really believe me when I tell them what my job is because a big part of it is just playing and watching stuff on the internet and watching YouTube or whatever. So it's a lot of fun because then that way we know what our clients are looking for, what the demographic is. We are brought in probably the very earliest. We are usually the first contact with the client.

We will do like a new business meeting or something like that. Ivan: We try not to do the same thing more than once because it gets stale for people here. So everything we do tries to at least build upon, or pick up, where something else left off. And so we usually cycle through, at the beginning of a project, what are we trying to do here? And who we are trying to reach? And what are 10 or 20 big ideas we can start with? And then finesse out later and figure out what they'd look like. Tina: Yeah, we have a lot of fun going through sort of the brainstorming process and it can be difficult because I think the strategy team is much more interested in sort of the concepts behind things and a lot of the other people here are like, "What it is going to look like? What we are going to make?" So we sort of try to break our brainstorming into two different parts where it's, "What's the story we are trying to tell? How are we trying to reach people?" And then once we sort of solidify that, we can come up with a little bit more of "How are we actually going to do that?" Ivan: The best thing about working on strategy Big Spaceship is that it kind of becomes an upward spiral in the brainstorms, especially where I feel like everyone has something incredibly inspiring and valuable to add.

And so we all sort of keep pushing each other upwards and one person will throw something out and someone will build on it and someone else will build on that. It's just, it's one of the best collaborative environments I have ever seen, much less, worked in. Tina: It's fun.