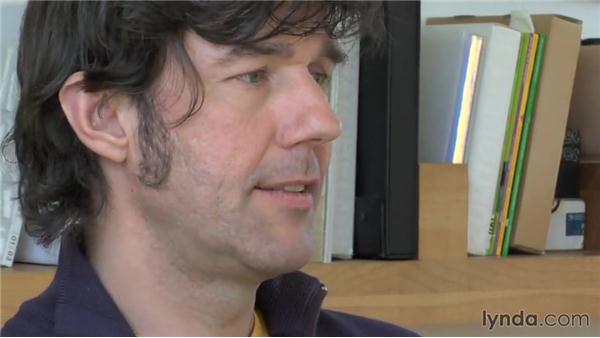 There were so many advantages of doing ACD color. I mean, it had, you know, it didn't get thrown away, it was one of those very few packages that really, you know, was kept, and, people treasured it. It was small, so you could put a lot of work in there, and then wind up with something very portable. It was definitely international, so you know, you would see the results everywhere in the world.

It was printed in large quantities. It may be best of all, allowed you to visualize something that is non-visual. So you could just listen to music and have that inspire visuals. Which is something that I'll actually miss now that we don't do it, now that we don't do them anymore. I mean that is a beautiful process, that you would, that is there in other design areas. Because normally you take, you know, I think it's also resulting in the fact why so much good out, came out from the album covers or the CD covers.

And relatively few good pieces came out of the movie poster. Because I think that the movie poster used without this some sort of visual and translate that from one medium to another, which in very few cases are successful. Almost works better in the movie still of that movie very rarely looks well on the poster. And often you have to use a still or some sort of, you know, representation. While in the, in the music world, there is a, you know, complete transformation of the content which I think, you know is responsible for the fact that a lot of good pieces came out of that section.

I'm interested in doing very, very, many different jobs, I mean you know, we do an inner report for lighting company, we might do an exhibit for a museum, we might do a cover for a speed metal band. Now if I were to use approach the same approach to these projects I would be an idiot. If I would use the same typefaces for these projects, it's, that would mean that I would also have to, you know, only have three pieces of clothing and use the same piece of clothing if I go, if I jump in to a public swimming pool or if I go to a black tie dinner.

It just, it makes no sense to me. We think quite a bit about the viewer on every project. And every project is custom made for that audience. And, I would think that the audience is my deciding factor if I at the end bound wind up liking it or not. If I design a cover for the Stones that I love but the audience of the Stones hates, I would think that that is a bad cover, no matter if I loved it by the time, during the time I designed it or when I gave it to the Stones.

If I learned that audience of the Stones really thinks that this is a bad cover, it is a bad cover. Period. Which is totally different in the art world, but you know, in the design world I think that these things have to work. And in the case of a CD cover working means being accepted by the fan base of the band. Of course if you're talking about airport signage, the function is a completely different one.

Nobody has to like it, but it has to get you there in a very, very efficient way. But, the fact that design has to work, I'm a big believer in.