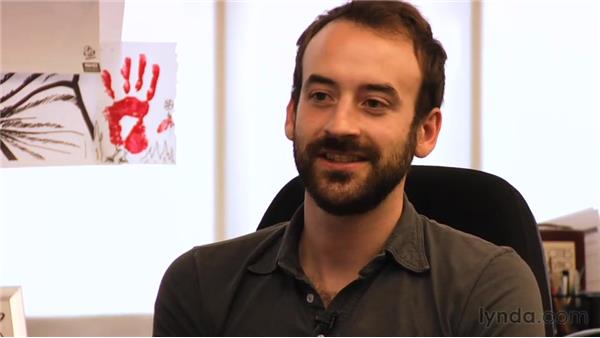 There is Jamie, and then you can add bear eyes to him and change him to Tyson, bear snout, and you could save it and it actually creates a little emblem around it for your desktop image. So, it's the special bears desktop image generator, with their tag line, "It's not our fault." Jamie: It hasn't been my fault in twenty-something years. I haven't been wrong. Michael: That's debatable. That's highly debatable. Zander Brimijoin: I don't necessarily see that technical production and creative expression are at odds with each other.

Joshua Hirsch: I agree. Zander: Often, like, we will come up ideas while exploring production techniques, whether it be, like, physical, building things physically and then an idea and a comp would come out of it, or whether it's exploring ways of coding specific things and then we will make a design to match what we can do, development-wise. So I think we are really - work really closely with production techniques.

Joshua: Yeah, I think technical production can be a way to express yourself creatively, just like anything else. And I think, I mean, there are technical limitations sometimes that can effect both, but that's just a limitation and a huge list of other limitations that we work with all the time, in any medium, any design medium, especially. That's part of the challenge, part of the fun. Zander: We do have some down time here and we like to use that down time to explore some things that might be in the back of people's heads and the idea would be that ultimately, these things are going to be useful later. We might use a technique that we develop and make something real for a client afterwards.

I am interested in doing installation work, so I wanted to do something small as, like, a demo of things that we could do. So, I wanted to take an activity that happens at Big Spaceship all the time and then have a Flash application react to it. So, we took foosball -- Joshua: Which happens here all the time. Zander: Right. So I decided to just map that activity and I buried light sensors in the goals of the foosball machine, and so every time somebody would score it would send some data to a Flash application.

And then I made animations that would be triggered every goal. So you would be playing foosball and you would see, every time you would score a goal it would sort of react with an animation and then also send it to a live server so you could check the live score whenever you wanted, from your desk, not that you would do that, but they were like setting ground work for a potential project maybe involving games that create live projections and without an experiment, somebody might not believe that we could do that.

Joshua: And learn valuable things too. The first, what was the first sensors? The first sensors were like touch, physical sensors. Zander: Yeah, I first used piezo sensors. Joshua: And then the score was like 111 to -5, sometimes. Zander: Right. It thought every time the table shook that there was a goal. Joshua: So that's some valuable learning we got from the experiment. Don't use piezo, use light sensors. Zander: Always use light sensors. Joshua: And the Dev team, again, during the down time I just encourage the team to just play with things, just like Zander said, you know, anything in the back of your mind, start playing around with it.

There are lot of specific things that we need to go out and experiment with, like different APIs for Facebook, OpenSocial, or YouTube, or Flicker, those things that we may not get the chance to apply to our project right now, so we're going to have to take time to learn it so we are ready and so we can pitch it, be really knowledgeable about pitching it for certain clients or for certain uses.