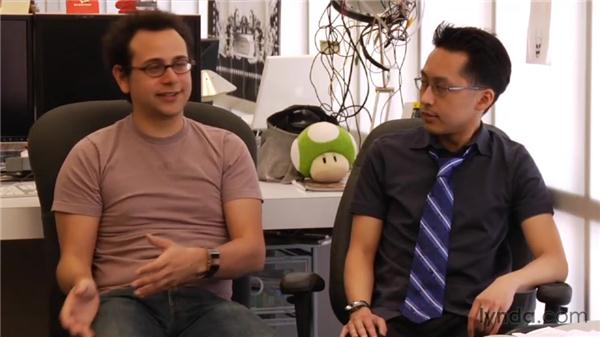 (Music playing) Mike Delosrayes: Basically, I click on a button until either it breaks or two, I pass out from exhaustion. Jamie Kosory: And my job is to make him pass out. Mike: Exactly. Well, usually, in beginning when I start QAing, I am pretty relaxed, because the project, it's new to me. So, I am acting like a user. I don't know what's going on. I don't know what to click. So, I will just browse around and I will click through whatever needs to be clicked through.

Jamie: By the time it gets to Mike's hands, we typically feel good enough that we know our stuff is going to break, but we feel like we have got it in a good enough place that we can get him to come in and look at it. And kind of one of the nice things about having him here and having a QA department here is that, and keeping them out of the loop of a project is that they can actually come in and just be confused, is a bug.

So, I don't know how to get to this section or if they don't reach a section, we can almost kind of like interview him afterwards, to ask him "Did you get to this thing? "Did you unlock that part? "Was this thing easy to figure out?" And if he is, like, "I don't know what you are talking about. "I never even saw that thing," then we have a bug that's much bigger than something not operating properly. There is kind of like a little bit of, I think, he uses the word play testing.

as an appropriate term for it. Mike: There isn't a time where I am actually sitting back and waiting for developers to fix a bug. So, while the developers are fixing bugs and optimizing the code, I am also QAing under all these different environments. I have to check at least six times, go through the sites, at least six times. Jamie: One of the sites that we had to QA pretty thoroughly was for Adobe Flash on. We had to have at least a couple hundred, maybe a thousand thumbnails that could appear on the site at any point in time.

And so we had to some up with some diagnostic utilities to help us determine if we were loading them all, but then Mike also had to kind of like painstakingly go through and see if a thumbnail loaded the wrong the video, or if a thumbnail didn't load or something to that effect. Mike: It's a lot of manual testing. We don't do any automated Jamie: That's what you think. Mike: That's what I think, yeah. Maybe the developers do, but all my testing is manual.

Jamie: One of the challenges we have going into QA is that everything that we have created, it's not going to be the same deal. It's going to be, sometimes there are just too many details, but it's rewarding for us when we get through that last bug. I feel like I want to like raise my hands and "Yes!"