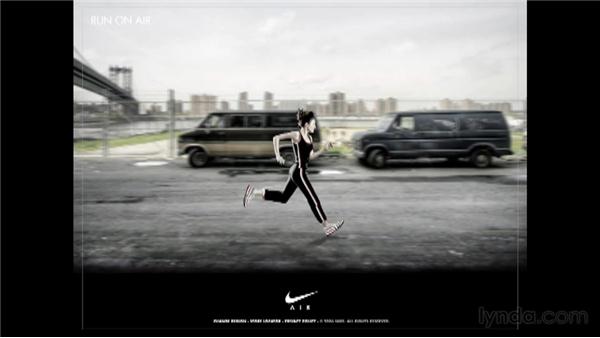 (Music playing) Michael Lebowitz: One project I thought it would be good to highlight is something we did for Nike. They came to us with a really, one of the most fabulous briefs we have ever gotten, because it was so simple. They said "We have done lineage. We have done the technology of the shoe. "We need to do the experience," and I think the way they said it is "The user can't "stick their foot through the monitor and try their shoe on.

"We want the next best thing." And that was it. Ultimately, the concept is like a visual synthesizer. You choose either running or basketball and as you progress from the real world into the More world you are given a value - or a call to action I should say, experience More world, use your keyboard. We really labored over this copy because we wanted - it's not a natural behavior, that we were asking people to participate in.

So, we needed to explain it because people wouldn't sort of adapt to it naturally on their own, but we didn't want to be so explicit that we took away from that 'Aha!' moment, the moment of discovery. So, it was just use your keyboard, no sense of what was going to happen when you did, and as you hit buttons on your keyboard, you are activating different visual effects that interact with the runner or basketball player that you have selected. So, that's the overall concept. And people are really creating their own vision of what More world really is.

The concept required a tremendous diversity of work and of assets, because we had two different iterations for running and basketball that required 30 different effects each, 26 for the little letter keys on the keyboard, and then the arrow keys as well. And we really wanted them to be sort of wildly diverse. We have flexed every muscle we have on that project. We had things that were done hand illustrated. There was code-based visuals interacting with video that we had shot against green screen.

There was pre-rendered 3D. There were pillows that pop up under the feet of the runner and then we did a lot of video effects on the runner and baller using the arrow keys, that you could actually affect their motion, as well. And all of this needed to tie into that overall sense of music, because the whole thing is that it's supposed to be a visual symphony. The core team we had two developers and a several designers just working on making sure that this thing had a visual consistency, that we were sort of covering the full design of the piece.

The production team was handling just generating the human assets of our characters, and then the individuals teams were - sometimes individuals, in the case of, we had a 3D artist who was doing an elephant inside of a bubble that you might blow with a kids toy. And he just worked completely on his own, just getting this very beautiful, individual piece there. In other cases, developers and designers were working together to accomplish something. So, a designer might have come up with a sort of hand illustrated thing and want to expose that to motion in some way, programmatically.

So, they would team up with a developer to find how to do that. And we also had to start thinking very carefully about how this system was going to function practically for the end user. It's a very video-intensive project and so we needed to think about what the experience was really going to be like when it wasn't all loaded instantly, which is the case that we are still living in, even in a mostly broadband world. One of the ways that we bridged that is we built a tool internally that allowed designers control over some of the visual effects that are only accessible through code inside of Flash.

So, usually these are the things that only programmers would have access to, and one of our developers created a system of just, it was very rudimentary, pretty ugly tool, but it allowed them to use sliders and dials and things like that to create effects on top of video, effects that were just generated with code so they were all instantly available because they were basically bandwidth free. And then as all these different pieces started to come together, we started to achieve the goal of the function of the piece, which was not just to create a one-off experience, but also, as people are hitting their keystrokes, playing with this toy that we have built, this experience, we are actually recording each keystroke along the way.

We actually can then show you what you have created or allow you to send that on to somebody else. So, your actual creation of More Air, of more world, is then available as sort of an artifact that can be sent out into the world, which is a really sort of satisfying final option to this experience that you have done. And the project was really, it was tremendously successful for the client. Nike Air has been around for 20 years, but that this is a completely new technology, a new experience, and a new product and they really just wanted the awareness of that in a very, very special way and in an innovative way, in a way that differentiated it from anything else out there in the marketplace.

And I think we really accomplished that.