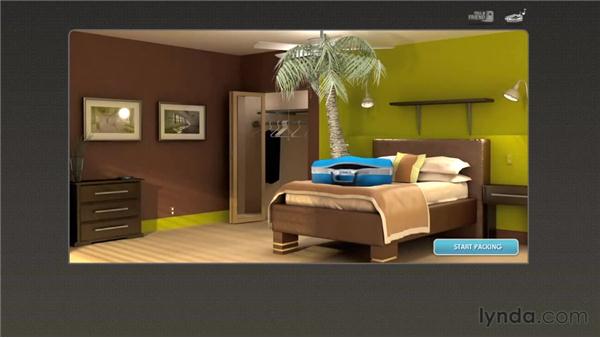 (Music playing) Michael Lebowitz: Another project that we had a huge amount of fun on was one that I actually wasn't so excited to do, initially. Arnold Worldwide came to us, wanting us to be the digital partner on a project for Royal Caribbean Cruise Lines and I thought, cruising? I am not sure if that's really right for us.

We tend to do stuff that's very sort of popular culture-oriented and influenced. And some of the team came to me and said, "We think this has tons of potential. "And we've got some ideas and we are really excited about them." And I said, "Alright. "Go ahead, run with it. "If you're excited, that's going to lead to better work, than anything else." The project, in a nutshell, is that you arrive in a bedroom that looks like any standard bedroom rendered in 3D, but there is a suitcase on the bed, and the suitcase starts talking to you in a sort of unidentifiable foreign accent, objects pop up in the room around you, some of them that make a lot of sense in that room, others not so much.

The idea is that you drag objects that appeal to you, because the overall program is called to the Vacation fun-a-lyzer. You can actually travel from room to room, so you can go from bedroom into living room, living room into kitchen, kitchen into bathroom. There are objects of all different kinds in each one. Once you've added, I think, five of possible 10 objects, he will then deliver you your customized vacation personality. And he delivers that in song as any suitcase would, so we created five musical numbers that correspond to the five potential destinations that you could arrive at, via Royal Caribbean.

We got to do absolutely everything. We created this character. We explored all different kinds of suitcases that he might be. We've got to cast the voice talent. We got to record, we did the voice recording here in our studio, Royal Caribbean remains a fantastic client.