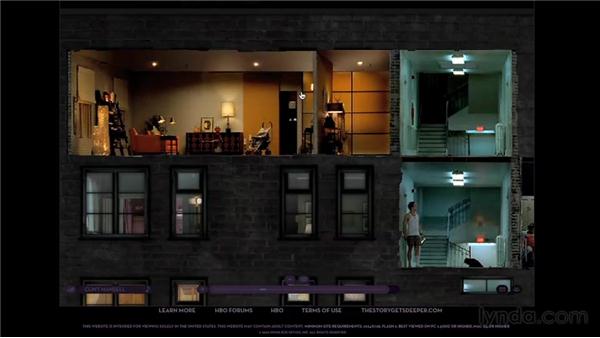 (Music playing) Michael Lebowitz: Another project that we did in the past year was a partnership with a HBO and their general agency, BBDO Worldwide. The concept that BBDO came up with was for where you had stripped away the wall of New York apartment building. So, you could see the eight apartments inside, and it's shot as a silent film.

There is no dialogue and you can watch all of these individual stories that are going on each apartment and then also some of the intersections that happen between the apartments themselves. They came to us before any of this had been shot. That was just sort of part of the plan. And the outdoor event, which was really neat, was to project this onto the side of a building on the lower-east side, so that you really felt like you were looking inside the building. When they actually did it, it was really fantastically beautiful. We went to the shoot and we participated with them. They hired Jake Scott, Ridley Scott's son, to shoot the piece and it's stunning, really beautiful.

And we really wanted to make sure that we were maintaining that piece of film as the hero of what we are doing, of our destination experience. One of the primary ways that we did it, technically, was rather than using pre-rendered 3D to allow you to sort of fly through the city of New York, we used the papervision3D engine in Flash that allowed us to create that sense of motion in a much, much lower bandwidth. We spent a lot of time working on the user interface that allowed people to do things like zoom in on the video, so you could see an individual apartment or a couple of apartments together, or you could see the entire wall turning on, which parts of it you could see and which you couldn't, in such a way that that user interface was only there when you needed to do something, but always faded into the background, so that, again, that beautiful piece of film could stand on its own as the focal point of the piece.

They also commissioned, I think, six composers to do different scores for this piece and we built a system allowed you to change the score in midstream and always stay synched up with the films. So, you really had some control over this experience and while it was like watching a film in a lot of ways and you could experience it that way, you also had a total freedom to experience it however you wanted. If you wanted to jump to the end, you can do that. If you wanted to change the tonality of it by changing the musical background, you could do that as well. We really spent a lot of time thinking about the difference between sitting back and watching something on your TV, where something is linear and you just watch, and the analogous experience in a world that you're used to controlling.

And that is one where you can't limit people to watch something four minutes long that goes from here to here. You have to let them go to any point in it, and see it however they want, and also bring it with them. So, we have built systems that allowed people to pull things into their iPod, to their PSP, to have a screensaver of the entire wall that they could watch. So, we are really trying to find ways of distributing this content out. And the response has been just tremendous. It generated more press, I think, than any other project we have ever done and has won, arguably, I think, the most awards we've ever received for a single project.

So, we couldn't be happier.