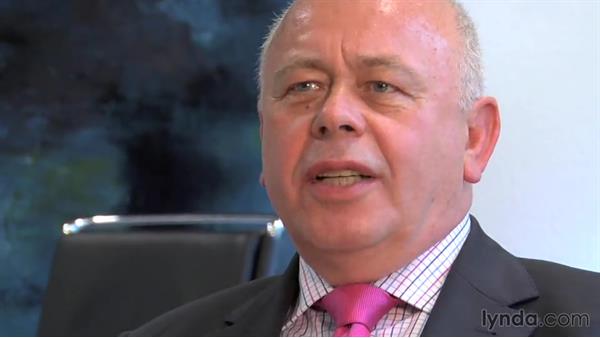 Type is, I think, one of the most important issues in my life, because my father was a calligrapher, and I, went, I went into the characters from the very first beginning. And, as I, I said, Helvetica was, for me, the start for my profession, because I was at the printer with my parents and, the guy at the Linotype said what's your name and I said Artmeyer Heffron. He keyed it in the machine and then it cast the lines, and he printed later on three, the three lines.

And I had my first business card and I looked at it, it was Helvetica. And it was my first business card and I said, this is the profession I want to go to. And since then, you know, it's like a flu, like an infection, you know? I cannot get rid of it, the first I do is ever morning, I open the newspaper and look at the ADS and see what typeface they are using I don't read it, I just identify the type. So I'm, tight minded and that's the way how I do my work here. >> And my story was different, it had to do with soccer with football, because my Dad was a soccer player, a football player.

And we have a huge family, five children and he had his own small he was a craftsman, he had his own small country. And when I was 14 he became ill, he's got problems with his knees as a result of his soccer playing. And his health problems became very serious, he's got heart attack and emboli and everything. And the doctor said he's going to die soon, so my mother was desperate and said okay boy, finish school right now and she sent me to apprenticeship. And a printer and I became a composer type setter at the age of 15.

My father died then, 45 years later, and so I've never done anything else and to me type is a challenge, it's kind of sports, you know, because everybody thinks. If friends ask me or people that I meet ask me, what do you do? Well, we do type, type, type what kind of type things? Fonts, you know? Okay is anybody buying for them? because well, there's lot of them on the computer okay, nice, we, we get very tiny little amounts, you know, but we tried to get them many, many times.

And that is the challenge, so we have piracy. We have a total unlearned appreciation of the value of funds. And everybody ask me, that a business, you know? Yes it is and I think that's the challenge and that motivates me, you know it's And also of course to work with the, with designers of all kind people like very young people with new and fresh ideas, that's a lot of fun. Helvetica, was, already a, it was a a world wide success.

And when Steve Jobs designed the Macintosh, he had the idea of, typography, on a personal computer, I mean, the Mac was never considered as a PC, or a personal computer but that was the idea. I did not have that that name for it yet, but the idea was the computer file we want versus IBM main frames etcetera. So, the idea was to have typography on it and there were discussions where, people talk about uh.the question but it's really uh,necessary or whether it really makes sense to have up to eight different type faces on one computer, beginning, but one thing was clear, Steve wanted to have uh,the famous fonts in it.

Linotype fonts because had a great interpretation in the 80's for their phototype setting font library, and Steven Jobs is a man that has a lot of sense for design and quality, he also, likes your design, your products, and it was, he wanted to have helvetica and some other type fonts on the original Mac, and he contacted Linotype, and Helvetica was.

Clearly, on top of the shopping list, on the priority, and at Linotype, we had discussions whether it makes sense, to license such a font to computer when nobody really had an idea what it was good for, you know? So,The first Macintosh that I ever saw, was able to talk, It had Macintalk in it so it could read a text and spell it, you know, and talk. But the said, okay, it's exciting, it talks, but what is it good for? And so we, we licensed some bitmap forms to to Apple.

And and then later on, Atode, Adobe found us, contacted Apple with their idea of a postscript controller on a. I think it was a Cannon, Cannon print engine, and then that talked about a typographical printer, a printer that was able to print real typefaces and since the latter types font were already in the Mac. They had to the negotiator license with Linotype as well, and that's how we got together, and that's how it all began, and how real type faces, rather than simple bit map fonts, you know, came into computers or processor computers.