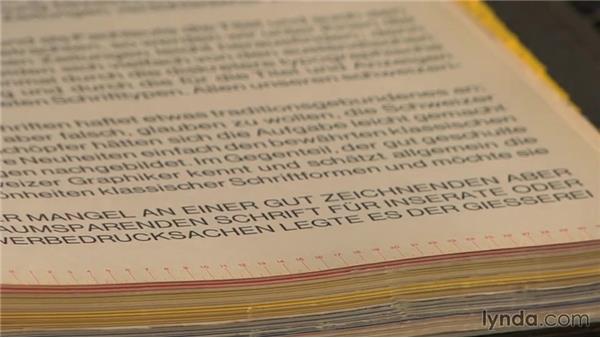 If I had to choose. If I was able to choose a period, in which I could've worked I think I would, really have chosen the one that I lucked into because I'm glad to have seen, how it was done in the past and to have practiced that. But I'm also, endlessly grateful to have survived into the day of digital technology which I regard, you know, as a gains and losses but. For me the balance is, is, is clear. I mean, there'll be more gains and losses. The wonderful thing about, about what we have now, the digital medium is that, alongside the computer, the Mac, sits a laser printer and this is a very hard point to make to students who think I'm an idiot when I say this but.

I had to wait, 536 years as a type designer before I could see in real time what it is I'm actually doing. In other words, I digitize a letter on the screen, and then, within seconds, I can play that out from the laser printer, actual size, I can combine two, three, four letters, and immediately, I've done them, and this is really as I say. In, in my profession, a, a great novelty when that, came about in the, late 80s, around 90s and so, when font formats became open.

And this whole field opened up. So that, that really made a huge difference. This ability to, to see. What I was doing, because in the days of punch cutting you know, I could hold a, a punch in the flame of a candle and dab it onto the paper, but it was very difficult to get the letters to, to line up. And then in my lino-type days, if, if we wanted trial matrices from the factory for a lino-type face. Trial work competed with production work, so sometimes had to wait weeks for mats to come back.

And even in the days of Verticom, it was still a sort of industrial process, and so I would take my drawings down to the factory but I, I mean the least I would have to wait would be a week or so before I got the results back. So there's always been historically this sort of suspension between a type designer doing something and actually seeing what it is that. He or she has done and it was the of the laser printer, which sort of set it to that and closed the loop. Which made a very big difference to the way I work. I would say that I learned judgement, you, you need in order to be a designer, by having to.

Put a lot of forethought into something like someone who is carving an inscription in marble, if you cut the wrong letter, you've lost a lot of work and you've got to go out and buy a new piece of marble, you know, so you take a lot of care before you whack the chisel with the mallet and so. But now you know, a student would say, big deal, at the end of the day you've done one letter, in the course of the day. Working on a computer, I can make dozens or maybe more, and so on, and that, that's how I learn judgement, I lay out all of these different forms, in, and, I choose one, and I think that's absolutely valid argument, I mean, I did think the way I did things, the way I did is inherently any better, or perhaps the way I did it.

There wasn't any alternative at that time. But I would never tell a student now that had to go and learn to make type by very painstaking hand methods you know. That they would thereby be a better designer. I actually don't believe that. I think there's a lot to be said for the present ability to change your mind, without a very, very big penalty. I'm proud to say I bought this in London in I think about 1961. It's a beautiful book, it's a ring binder. It was designed by Josef Muller Brockmann, enormously eminent, Swiss graphic designer.

And it takes the form of a, of this binder. It's arranged by point size and it's just multiple copies of the same sheet printed over and over again. Different sizes. And along the head and the foot of the page, it's calibrated in Cicero Ms. So that if you, a graphic designer, are wanting to make a layout using Helvetica, you can put a straightedge on, whatever the width of your column is. And cut yourself a slab of Helvetica text at your appropriate size, and paste it in.

And it goes all the way up to the larger sizes. I think, some of my pages, interestingly enough, have the word Helvetica on them. Some also have or only So, this must have been put together. Just while it was changing its name. So we go up in size and then we have the heavier weights and so on. Most of the pages are black, some are in red, like this one, we're getting up to the display sizes. But, I've always loved this book and so, I'm not really a collector but I'm so glad that I bought this when I did.

Because the fact that this was a tool, designed as a tool for graphic designers, means, I think, that not many of them have survived because they would have chopped them all up to make their layouts out of them. I'm not a type user, I'm a type designers, and this to me was a, was a sort of icon more than a, more than a tool. But I love this thing. And I have to believe that the availability of this when it appeared, must have had a great deal to do with the success of the domestic market in a, in, in Switzerland and beyond in Europe.

Because what could be better for a designer than to have this in order to, to, make nice layouts using this typeface and then of course you send it off to the, to the typesetter who is then obliged to install the size of Helvetian. You get a pulsar effect in, in, in terms of sales. So this is as I say, a very treasured possession of mine. And something that I'm really glad that I, grabbed at the time I did. That I'd rather hope they're not aware of my presence.

I mean, if, if someone, who's reading the daily newspaper or a magazine, becomes conscious of the type it's generally because there's a problem. And, I would just assume, that they didn't have that reaction. So, my part in this tends to be fairly anonymous. I, you know, it, it's a curious thing. I mean, you can imagine, if I, my type is used in the local paper, The Boston Globe, but if I went on the, on the subway in the morning, in the rush hour and held up, Eight and a half by 11 pieces of paper with the lower case E in miller which happens to be the typeface globe uses for their text.

Held this up in front of someone reading the globe, and said do you recognise this E? They would not do so, they would think I was a lunatic probably, you know? But they've just read. You know, say they had been reading the globe for ten minutes. The E is the most frequent letter in the English language. They've probably consumed thousands of these Es in the course of reading, you know, half a page of the Globe or something or other. So why, why don't they recognize the E? Well, again, I'm glad they don't because there would be a problem with the E, probably, if it jumped out of the page and they, they said, oh God, that's the E that's been tripping me up ten times every line.

But It's a bit, you know, the analogy that I've, that I've arrived at is, is, is a bit like, if I were to hold up a piece of thread in front of someone on the train and say, is this thread out of your suit? And they said, I have no idea and I said well, you must have bought this suit and chose to put it on this morning, how come you don't recognize this thread? Well obviously, the thread is the concern of the person who wove the cloth, the tailor maybe or so on. It's sort of the atomic level, and be very unusual for someone to be able to recognize there suit thread by thread in the same way that people don't recognize type faces letter by letter on, on the page.