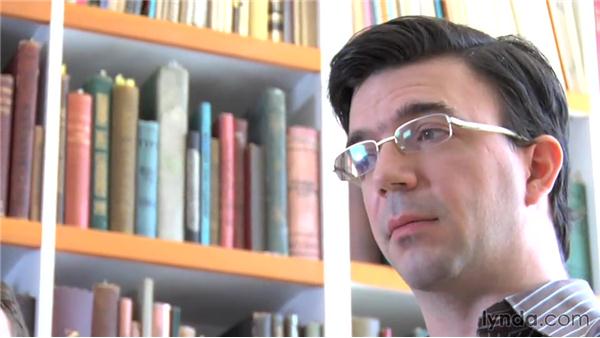 I think I had an anxiety dream about serifs once. But that was a really long time ago. >> I, I will certainly say that I'm aware of type in the world more than other things. I mean, I know people who can identify any make of car at a distance or know who designed a certain dress. But I still think of things in terms of in terms of topography, that's an ingredient. I'm always looking for books and how I'm going to say to my wife, where is that, that, that book that your friend gave you. And she say, which book? And I say, I can't remember but it's, it's brown and the, the title's running down the side all caps in the monotype operators.

And of course that means something to her as a non-designer, but that's my, my memory of the book is simply it's typography. So that certainly occurs, I think. >> One of the more memorable experiences I had trying to explain what it is I do in is in, just as I was, I was leaving college I was in a, in a bar in Providence, Rhode Island. I was unwinding after a class or something, and I was drawing, just doodling a couple of letters on the back of a bar napkin. And, some, Providence local saw what I was doing and, was trying to figure out what I was, what I was going on about here.

And he couldn't figure it out. So he had to ask me what, what am I doing here. So I explained. I'm a typeface designer, I make these things called typefaces. He had absolutely no idea what he was, what I was talking about. So, I explained it again using some kind of metaphor. I forgot what. And he still didn't understand it. So, I explained it a third time using, some other kind of metaphor. I just made up on the spot and, and he finally got it. And saw the light bulb went off and. He said okay, well let me see if I get this, if I, if I, understand this, if I get this. Your job is you make new letters and new alphabets, is that it? I said yeah that's it, yeah, that's, that's what I do.

Then he thought about that for a minute and he sort of look kind of, kind of worried. And so we didn't know it means, is that illegal? We've been collecting these, these antique specimen books for, I don't know it's been like 15, 16, years? >> 18 or 19, yeah. >> Yeah, I'm loosing track apparently. Obviously they're prime reference sources for our own design work but their also just beautiful things to have. >> This is the first type specimen book I ever bought. It's the 1923 catalog of the American Type Founders company. It's a beautiful book I mean beyond it's being kind of of showcasing the fonts it's been designed so attentively.

This is a piece of marketing material, it's a piece of ephemera that's been, just so lavishly designed and produced. It's really, I don't know. It, it just, it's, it, it does a kindness to it the type designers whose work is showcased inside and your comment earlier about the, what will we think of the quality of typography and design going forward. I think the average printed thing today is better than it has ever been in the past. But the ways in which typefaces are shown is somewhat disappointing. They take more work than ever and they are often rendered as an alphabet in 12 point and that's it.

So much goes into making these things, to to see them shown in this way historically is really satisfying. >> It's not quite the equivalent of, you know, a pottery barn catalog, but in terms of it's being conceived as something disposable, it often would be. Which is why, many of these are very hard to find, because they were disposed off and replaced with, you know, the next edition from a few years later. Well, Gotham was the face that came out of the commission from GQ magazine. And, their, initial brief to us was, almost entirely aesthetic where they wanted a Sans Serif on a geometric structure.

That would look masculine and, and new, and, and, and fresh, and be versatile in, in their parts of the magazine in editorial settings. >> There's a second part of that as well. Randy Plases and Paul Martinez who are designing the magazine gives a collection of things they've been looking at as possible candidates. And half of them were incredible slick. These sort of, like you know, techno CD band poster, rave, very up to the moment things. The other half were very traditional.

Typeface like Futura, which is now 80 or 90 years-old. >> Lot's of Bauhaus stuff. >> A lot of things from Bauhaus, a lot of things from early Modernism. And it was clear they had this sort of dual agenda of something that was going to be very,very fresh and yet very established, to have a kind of credible voice to it, so that's, that's who we began our process. >> We both grew up in the city and independently we've walked around the streets and the earmarked piece of lettering or signage that we thought would be a good seed or starting point for a project somewhere down the line.

And we both noticed the lettering on the Port Authority Bus Terminal, up on 42nd Street and 8th Avenue. The lettering over the front door is this very plain, geometric letter. But it's not the kind of letter that a type designer would make. It's a kind of letter that an engineer would make. It was born outside of, of type design, in some other world and has a very distinct flavor from that. >> I'd say also, its representative of a style of lettering we both noticed for years, and even began before the Gotham project began. We've been discussing this kind of lettering that we've seen.

And there is no, I don't know if there is a name for it in the literature. We, we sort of describe it as American vernacular, mid-century thing. And you see a painted, you see it engraved, you see it made of aluminum. I mean a variety of media. The port authority example is seem making a specially exemplary one. Some of the difficult letters have been handled really well. It had the kind of, even us and, and space in it would recommend it to a typeface. So we took that as the seed for the Gotham project. >> Collecting the, the material for Gotham meant walking around Manhattan with, with a camera and photographing lettering and, and numbers on buildings.

Mostly around midtown Manhattan. And after we collected the material for that particular project I decided to continue that. And, so, I made a whole other project just, you know, without any client just for myself. And that called for me to visit every last block in Manhattan. Every intersection, every street, back alley and so on. And photograph every piece of lettering, that was sort of, handmade or specially made for, for that situation.

The, everything that was not a typeface. I've covered, Manhattan from 14th Street, down to, Battery Park. It's taken, I think about three years to do that. And I've got, so far about 3,500 photos. This is a style of, of numbers, made of decals, adhering to the, the back of the glass. This is a style, that you would see on a lot of the transom windows, of side tenements. we, we use this for the, the number is typeface we call it Delancey, that we released earlier this year.

This is the kind of detail you would see on a lot of these old buildings. You know, some kind of name would be, you know, put on the, on the corners of the building, or its, its builder or its building date would sort of be loudly proclaimed, and so this, this, great measure of expression of pride, that you don't really see much of anymore.