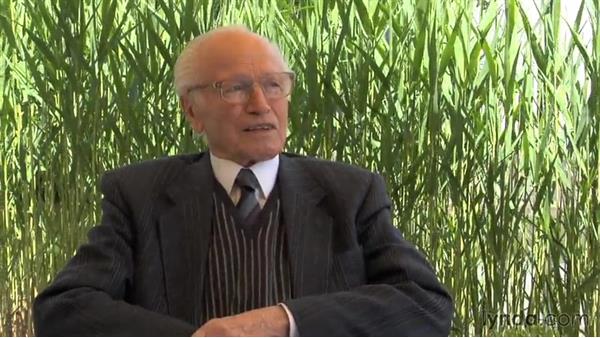 Originally I am a calligrapher, and I started more than 60 years with my first practice sign. And it was in the 40's. And, now. Since all the years I've done quite a lot of type faces, mostly for the linotype company. Very few for others. And I think I have done enough. Mostly, my type designs are commissions.

My companies, only a few typefaces werth my own idea, this was Palatino which was based on my calligraphy, the other one was Optima, which started in 1950, doing a visit of Italy. And after this I thought. Maybe these fonts which I saw in Rome and in Florence, could be maybe once used for a typeface. And this idea, I needed eight years to get it finished.

In the old days, let's say, if I say old days I mean the middle typeface. The typefaces which I did at that time, it was the 50's or 60's, if I see it today, I see all the same compromises. And therefore I have redesigned some of my, typefaces like Optima and Valentino. We made it up to date with a new technical possibilities, which are immense possibilities, compared to the old days.

So, I'm very happy, that I could do this in, in my age. Let me say so. So I've still a very steady hand. I don't drink coffee and therefore I. Have no shaky hands, but of course, you must be lucky if you have your hands in such good shape, and you can still do this. So I've redesigned all this, most of my middle time phases in the stitches of, possibilities. And I'm very happy for that.

I must confess I've never used helvetica, for I'm a fan for and for me, to know my feelings about helvetica I think should be interesting for you. It leaves a little too much, 19th century in parts in helvetica. It deforms. It's a good design, no question, but typeface also represents a style and in my case, helvetica is always this touch of the 19th century.

Therefore I like much more. It's only 20th century design and it's not so much in the details, connected with the past. For he did really a design. For our time. And if you know we are really far away from all the thinking of the 19th century, so the spirit of the 19th century, I always see in Helvetica. I'm sorry that I cannot give you too much positive aspects, about my feelings, It such a huge selection of sens phrases today.

I hope people will, use more sens, not only one, not only helevitica and but also some designs of young people, of young designers. Which, you see the market is filled with all these, great names, like Helvetica. And they've, charged for them to find a little space, to put charity sign in the space. And why not? One day, some people will find a new solution for San Serif.

Which is much better with Helvetica. Perhaps, for a lot of designers are now around, in the old days, we, we've, you could count them on, on, on two hands. But they there's hundreds putting, letters together or making typefaces. Why not? It's always a game, which time is successful, which time, is the right time. If it, a typeface which maybe, far ahead of the time.

Like, futura for instance and so I hope that, will bring, more variety in our, advertising, and, it's maybe a little too critical. I would say, not always should be used Helvetica. There are lot's, and lot's of other good around. Good. >> That's good.