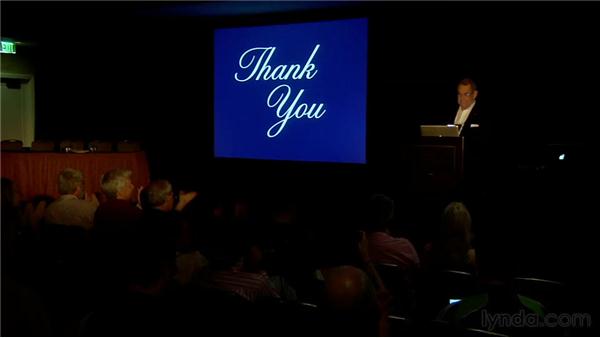 (Music playing) Doyald Young: We?re here at the Century Plaza Hotel and it?s a conference called TypeCon, and I?ve been invited by SOTA which is the Society of Typographic Aficionados. Typographers from all over the world come and trade ideas, and show what they have done, show their new fonts. And it?s a chance to meet young designers. Remember I?m a teacher too.

It?s a chance to meet young designers. They always have questions and it?s always fun to talk to them. And it?s a place to sell my books. Conferences are really-- It's a forum. It's a place where you learn, where we explain, where we teach. And they?re very eager. Fan 1: Big fan. Doyald: Are you really? Fan 1: Actually the first and only time I saw you was at the HOW conference in Chicago several years ago. Doyald: Oh, I remember. Yes? Fan 1: And I was hooked.

Fan 2: Well, I have to say, you're one of my idols. You and Jim Parkinson and Marian. Doyald: Well, my goodness. Fan 3: Such a pleasure hearing you speak. I've heard so many things about you. Fan 4: And I appreciate this kind of very... Doyald: Well, thank you very much. Doyald: Marian! Marian Bantjes: Doyald! Sean Adams: So things are going well? Are you ready for today? Doyald: Oh never. But I am-- You?re always perfectly charming and fantastic. (Inaudible) Man speaking: It truly gives me great pleasure to be able to introduce to you or reintroduce to you one of the heroes of our craft.

A kind, gentle, elegant man, who draws incredibly elegant typefaces. Please welcome Doyald Young. (Applause) Doyald: During the time I was going to night school, I was introduced to typography and of course the first thing you want to do is you want design a font.

Well, finally in 1985 Letraset accepted this font, Young Baroque. And I don?t consider myself a type designer. I have designed just a few. I?m always impressed with the great number of fonts that you people design. JF this morning, he had 20 or 30 fonts he had designed. He?s a young man. I?m really a dilettante. (Laughter) I start a font -- no, it's true -- and then I work on it for a little while, and then I put it away for two or three years and come back.

I seldom see my fonts used. But the Bianca Studios in New York designed this. Used it for Madonna's reinvention tour, It's when she was into mysticism. (Laughter) I've never thought that Young Baroque was mystic. And uh, Fergie likes it. (Laughter) But Julian Peploe didn?t think it was fancy enough so he added more swirls to it. Here is a Eclat.

I've never been fond of the name. It means, if you look it up in the dictionary, it means bursting. It also means a certain kind of panache. I had wanted to call it Elan, as in ?lan vital. But the name had been taken, so I said okay. And Fergie likes it too. (Laughter) (Applause) Someone once called my work scattershot. My design approach. Well.

You never know what a client will buy. I think also that you truly have to explore any problem, any design problem, as many as you can Nothing is more embarrassing if you make a presentation and the client doesn?t like what you?ve done and someone in the room suggests something else that the president likes. So also, never forget the presidents and CEOs also take the logos home to their wives and get opinions from their wives.

I think that logo preference and type preference is strictly personal. People say, "Well, what?s your favorite font?" I don?t know. It depends. Do you mean a text font or display font? It?s like asking a mother which is your favorite children. I was speaking to a teacher at Art Center once, and he said how much he hated Palatino. And I said, "Well, I think it's one of the most important parts of the 20th century." So you see, we all have different ideas about type.

Man speaking: Master of the college. And first we have (inaudible). (Applause) Marian Bantjes: Hello. The other day, Doyald told me he?s not interested in making things new, but in making them better. In these days of instant gratification, short attention spans, and the eternal quest for the hot new thing, I feel we desperately need more Doyalds who is willing to work and work with that focused skill and over the years make things better better better.

SEAN ADAMS: Beyond his talent I always found his greatest gift to me is the reminder that giving back, being charming, being gracious, and having patience, are what makes someone a great designer. Not necessarily doing the most out-there, doing exciting work at all times, but being a good person on top of that. There is a great quote by Oscar Wilde, who I know you like to quote once in awhile, and it is that "It is absurd to divide people into good and bad.

People are either charming or tedious." Doyald is always charming. (Applause) James Grieshaber: For this year, on behalf of SOTA, I?m honored to award Doyald Young the SOTA Typographer Award. (Applause) Doyald: All these things have always been a surprise to me.

I have never-- I?ve been accused of being self-effacing. But it?s really unexpected and again, I thank you for the great honor. Wonderful to do work all your life, sometimes 7 days a week mostly, and then get applauded for it. Thank you. (Applause) I?ll still learning how to draw. There are no secrets to what I do. All I do is hard work and observations. Really.

And doing things over and over until you're satisfied with it and until you think it?s right.