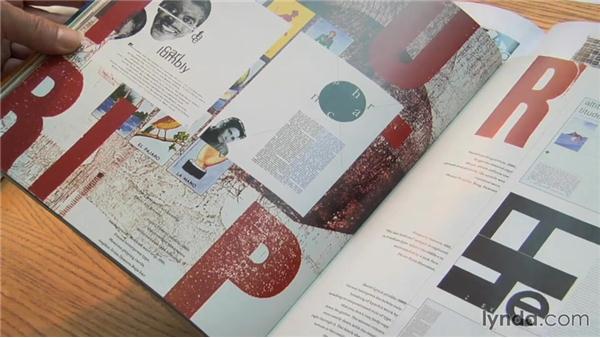 I think that came from starting out with a Skateboard Magazine where there was no budget, literally no budget, no outside photographers, nothing. And so I was forced to deal with, with like a skater bringing in his handwritten article or maybe mailing it in, a couple snapshots and just nothing, I mean, it was like I got six pages. And so then I began looking at well, let's look at the envelope, well there's a cool stamp with a mark on it, ooh look at the guy's hand lettering, hm, well maybe we'll use that.

And then well what about the section of this photo, I can just blow this up and then it's get much more interesting and, I was kind of forced to work that way and to make things more interesting I felt. And that way of working has always stuck with me. So I still when I get something I'm looking in the corners, I'm looking at the package it arrived in, I'm, I'm looking at any possible thing, you know, that, that might be used to help send the, the message or the emotion of the piece. All right so here's a, here's an example. It was still being done by hand, this page in Ray Gun but I, I had this publicity photo of this singer and I didn't really care for it so I had taped off where I wanted it cropped and I thought well that's kind of interesting and then I played around with some acetate and finally ended up using that and I, the whole image, where I never intended to.

Now that's, maybe not, tied in heavily to the, to the copy, but I think a big part of my work is being open to unexpected things and, and accidents in a sense. And because it's an accident doesn't make it good, but if you can be open to that um,sometimes that's your best result. This page, this was an article about Lyle Lovett. And, I had a lot of photos of the singer, staring at the camera with his guitar, whatever, and there was one where it's all of him but he was clearly standing on his mark.

The masking tape. And I just cropped it and thought, that's perfect. You can't it just says to me Lyle Lovett, better than another shot of his, of his hair or something would adjust the stance, the boots, the the oversized pants, that's and he's on his mark, it's just great and photoed by Alan Messier Really for me was still one of my favorite pages. And this is early computer where realizing how easy it was to make boxes and thing and the title is called what is, what is all this noise about.

And so I was trying to make it kind of noisy at the time. Now I would probably make it a lot noisier. Article on snowboarding talking about altitude. And I just wanted the type to get higher. I didn't have enough type to, to do it, so I repeated the article twice and that gave, allowed me to get the shape I wanted. And to me that defined the title then, Altitude and Attitude. So I've got the altitude and the attitude probably comes in and repeating the article twice to try to get a shape I wanted.

And a lot of white space because it's a, a snow article. I mean I could do this endlessly obviously. As, as, as could any designer discussing their own work. But Well the readers are lazy. The bulk of the stuff they're seeing is not coming I would say from necessarily designers or, or what I might call good designers. It's an easy fix to go with Times go with Helvetica. No one's going to probably yell at you, and they're not going to get real excited either. And there are some people that can do spectacular things with, with boring typefaces like helvetica.

But they're few and far between. And and for the rest of the people, they can't go wrong with it. Where you try to take a hand written or special, very unique font and do something well with it. It's a lot harder, and your mom, mom's best friend maybe can't use it quite as well, as she can Helvetica. And maybe that makes the point that that, that's why I have that against good because anyone can use it. But then why, or, you know, if you ever go to church and you look at the, the, the thing that gave you for that days service it's really boring.

It's really horrible you know. Maybe if they did use times and a medic and whatever they might get more people in, you know. I don't know. But those things are deadly. And a secretary did them because she can and, you know one of the first days of Reagan they rented me a computer and it came with,with five fonts. And one of them was Helvetica and one of them was Chicago, you know, that's where I first learned that fonts named after cities are usually a little scary.

New York was on there. I forgot, I think that's four of them, anyway. I mean, if, you're trying to get as, specifically Helvetica, I just, I'd have a hard time getting worked up either way about it. And maybe that's it's problem for me. That, I don't love it, I don't hate it. It works. And no one's going to yell at you, and. But I don't know, I think it's maybe too easy sometimes.