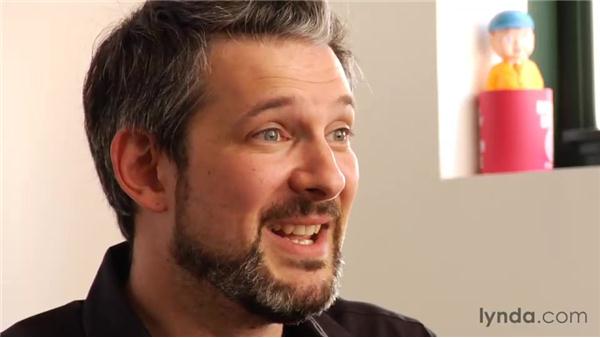 (Music playing) Michael Lebowitz: One thing I should mention is that we're in this team system, we're cross disciplinary teams and each team, we were going to put each team at a table and then we realized that it would be far better to have people in an aisle because then they could just rotate their chairs inwards to have one-off spot conversations because the whole idea is that they're autonomous and self organizing.

Well, I think what differentiates Big Spaceship is it's a tremendous focus on innovation. We may do little things that are only apparent to us internally, optimizing something, squeezing a little tiny bit more space out of something. We talk a lot about using the analogy of architecture or software development more than film and video, which is the common analogy to what we do.

And I think that we've always said "What can we do better?" on every front, and that allows us to not get too rigid, and not force too much process on the work and instead allow the process to just scaffold the thinking that we do here. I think, especially with what we do and with the pressure we put on ourselves to never repeat, to always produce something new, even if it's in a similar space to something we've done before, you need to have a really, really flexible, elastic environment that allows you to that.

That's the real reason for it is that we need to be working collaboratively in real time with each other as much as we possibly can in order to get quality out of the work and to let inspiration really happen, because inspiration is a momentary thing and as soon as you've sort of codified the process of inspiration, it's no longer expiration at all. Its just idea-having and ideas - it's sort of strange for me to say this, but in a lot of ways, ideas are a dime a dozen.

There are great ideas, but they're only great when they get implemented, and what gets things to happen is that, is the momentum of the excitement of the idea. And so if you don't have a system that allows for that and nurtures that in some way, it's not going to really work. So we don't make any guarantees about the success of what we do, because working with us or doing the kind of work that we do in the space that we do it has some essential risk to it. If you want to innovate, if you want to differentiate, you have to take risks.

I actually don't think that they are huge risks. I mean, if you look at some of the most successful companies in the world, they're giant risk-takers. You look at Apple or Google. They're not afraid to put things out there and have them fail, because that's how you innovate. That's how you differentiate yourself. So we don't make any guarantees, but we say based on our experience and what our gut tells us, this is going to be very compelling for your audience.

The traditional mentality for producing work through an agency is a cascading approach. Strategy or planning will receive the brief and plan it. They'll pass it to project management, who will scope it and make it actionable, who then hurl it over the fence to design, who make it visual, who then hurl it over the fence to the engineers at the end, the poor sad engineers, who get their hands on this thing and say, wow! We would've made 900 decisions differently if you had included us at the beginning and that leads to a lot of mediocrity.

When you get to the actual execution of work, what separates good from great often is that last 10% of polish, of attention to detail, and we have that so fundamentally built into our culture. Every project is different, every goal, no matter how similar it sounds is going to have a different story to it. So, we have to get into that and really figure out who are these people we're talking to? They're not just users, they're not consumers, they're people and we need to speak to them in an authentic way and then once that decision is made, it's really about guiding the process enough that it remains authentic and that really is an ongoing dialogue between our clients and us and those people out there.