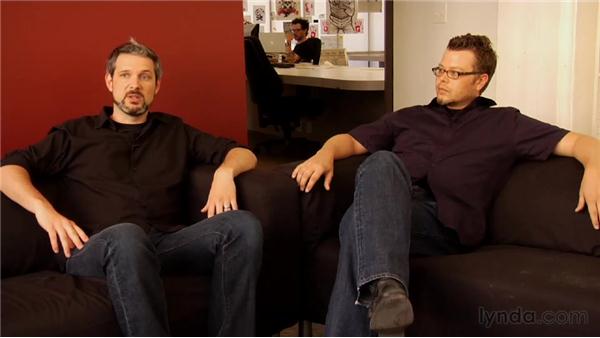 (Music playing) Michael Lebowitz: And the other side of the luminescent wall we've the opportunity to write on the wall and dry erase. So that was supposed to be for meetings but it's turned into just an opportunity for lots of graffiti. We've also used this space because it's got such a nice long expanse for doing deep video work where we need somebody sort of running at us. In fact, if you look back over here, there is a white shirt with bloodstains all over it.

That isn't actual blood. That's our fake blood. For the game we did for 30 days of night, one of the two games, we had vampires running at you and you were a sheriff with a rifle shooting back at them and that's what the vampire was wearing. The funny designer in-joke, of that, is that the vampire was the producer on the project and the person shooting him was the art director, a little comment on traditional roles in design agencies.

It's really essential that we collaborate with our clients from the very beginning of an engagement. At the beginning of our discovery period, we tend to do a pretty deep dive meeting with our clients to try to pull to the foreground all of the expectations that they may have, that they haven't been fully voiced, to try to get a sort of an inventory of all of the assets that we might have available to us, all of the stakeholders that we may not have met with, or have been made aware of, and really get a nuanced sense of their goals and expectations.

And then give them a sense of how we go about having ideas and that we were just incredibly open to anything that might be said by anybody. It isn't just to client collaboration, but all collaboration here that we really don't have any hierarchy of creativity, of brainstorming, whatsoever. Anybody, at any level, who has an idea, has a voice and an audience to hear that idea and that's really integral to everything that we do. And so getting as many different perspectives, and that includes all the different client perspectives, in the room at the outset is absolutely essential to the success of a project.

Jason Prohaska: The people that engage the client directly are predominately the producers. We've consciously chosen not to have account managers up to this point because they've added a layer of diffusion of the messages that we need to - we're really going for the most transparency that we can possibly achieve. It's more of kind of friendship management, where we're trying to move through professional walls of communications and just get to the real nitty-gritty of here is who we are, here is what we like to do, what are you interested in, and how can we best facilitate those lines of communication.

You know, we're getting ready with this Andromeda ARG Campaign to send some folks over to have a debriefing with the client. It's going to be a little bit of a wrap party but we're also going to be talking about the successes and some of the knowledge management that we learned together about, not only to inform what we did but also how we can improve on what we might do together next. And that, over the course of a project, is very much like a real relationship. You're developing understandings that, you know, a lot of clients come to us and they just want the facts.

They just want to know what we do, and that's not a core principle of how we approach things, initially. We really want to help the best levels of understanding come to the very forefront of what we're doing, so that everything is very transparent, everything is very clear and we understand what we're doing together. So that we can comment on things, if they're good or if they're bad. Michael: We tend to be brutally honest and maybe that's not as much of the norm as it should be. As much as possible, we really try to say, you know, "Hey! "You're trying to offer us money, but it's not best spent with us." People aren't used to hearing that. Everybody is "Oh yeah! We can do that.

"We'll take it. Give us more budget." And we don't take that approach. We know what we're really good at and the value we provide and we know how to work with others, and collaborate with other companies and other agencies and other providers in a way that, that's going to do the best job for the client. And so, we try really hard to be super clear about what it is that we're providing and what isn't the best thing for us to do.