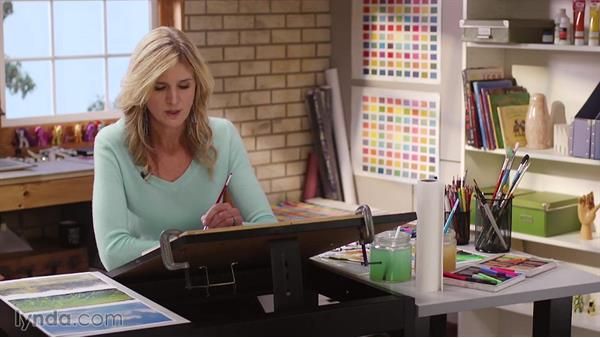 Join Mary Jane Begin for an in-depth discussion in this video Creating light and dark texture in grass, part of Artist at Work: Textures.

So I'll start with the composite, which is basically a layout of all the colors I used blocked in. And then I used a little bit of light and shadow to try to show you how this piece is articulated. And the reason why I felt it was important to show textures in this piece, is I'm trying to articulate autumn, a sense of warmth of autumn, and also, a feel of something that's live and moving. So with contrast, I'll show you how I pull things forward in this space.

I'll use perspective to show how soft textures land the background, and higher-contrast textures are in the foreground. I'll also talk about organic mark making, as well as rigid more pattern mark making, and all these things add up to texture. I'll start with this piece on the grass in the foreground, move to the middle ground, and then to the background. And in some cases, I'll be pulling out color with a scrub brush, which is just a stiff bristled brush, and other times I'll be using paint to add to this piece, to bring highlights to the image to show you different textures from different directions.

Some will be vertical, some horizontal. And some will be pattern-oriented. So I'm going to start with the area in the foreground, the grass. And I'm going to use a scrub brush to create that, which basically pulls color off of the surface, and I thought I'd start with this, because it's the highest level of contrastive texture in the entire piece. The grass blades are sort of pointing into the picture. I put a very dark color down. And contrast it with a sort of probably the lightest color in this whole piece.

It'll be green, but it'll be quite bright and quite light. And the reason why I do that is I want the eye to look here and then look into the picture. The texture's also more vertical so I'll try not to make every texture I have here, a vertical texture. The water will be horizontal as a point of contrast. When you're thinking about textures in a piece, it's really a matter of thinking about how to vary your surfaces. Just like you want to vary the colors and the shapes, you want to vary the textures, as well.

And I think it's important to remember you have those at your disposal. Regardless of the, the medium that you're using. And the more that you play with them and create variety, better. So this is probably the largest shape of light and dark texture. It's a strong sort of, vertical stroke that points into the picture. I wouldn't point all these marks out of the picture. Because it would tend to send the viewer there. So this is just a start, and for me, when I use a scrub brush I'm using it as a guideline, and then I'll go back in, and typically I'll paint slightly brighter, and in some cases much brighter color, to make that stronger mark and I'll show you that looks like, and now you can really see this.

And I'm looking at the grass that I use as a reference just to remind myself of what grass looks like, and it does have a very strong contrast of light. Where the grass is and dark where it's, you know, grass in shadow. Sort of like hairs like that as well. So I'm just pulling a couple different greens. I'm going to try not to cover up all of the, of the brown sort of color. It's brown plus green. That's making up the shadow area. I'm using a fair amount of opaque color, but if I go more densely, and I'll show you what that looks like, more opaquely, it'll pop off this dark ground and create a wonderful sense of I think, grass in the foreground, and then some that's in the background.

There's also cat-o-nine tails, so I'll add a little bit brown to those. Basically, if you're painting anything like fur or, which is a wonderful texture, or grass or anything that's hairlike, if you start with a dark base, it's easier to see the line strokes of, of the fur or the grass or the hair. It's harder to build up to that darkness from a light tone. It's easier to start with dark and work with light over it. So I'm just adding a little more green. And I'm trying not to hide all of that nice, dark color back there.

I also want this to be just like your, your vibrancy issue, you want the vibrancy and the high contrastive texture to be kind of in the same place, because you don't want to send the eye into a million different directions, you want them to be focused in the same area. So I'll try to point this grass in the direction of the characters, which is the focal point of this piece, the two main characters which will be Badger and Ratty, and of course Toady in the background. As you can see, I've put a nice bright color on Toady, so that you'd see him.

He's more important than the things around him, so he has to pop, stand out. Okay, so that's just one area of texture. I'll add a little bit of brown for the cat of nine tails, and show you a different texture. And these are realistic-looking textures. These aren't these aren't really super graphic, but even if this was painted in a way that was a very flat graphic, you'd have a tendency to think about these shapes very much the same way, dark and light, textures and direction of the textures.

Let me just put these cat of nine tails in here. And for this piece, I, I wanted things to feel like the water was rippling and the grass was moving a little bit, so I didn't want things to look rigid. I had lots of angles and directions for the various textures. Now the other thing that I did was to pop the contrast of the water in between the blades of grass. So that you would see this texture more clearly. And that's something that you know, you, you, you push the emphasis of this color behind it to show, you know, what's in front.

So I'm just going to build those up a little bit more, and then show you what I did with the water.

2/7/2014
Mary Jane Begin is back with more from the Artist at Work series. This installment focuses on adding texture to your imagery—visual texture that breaks up repetitive strokes and static blocks of color—with pattern, color, light, and a variety of brush strokes. Mary Jane takes an early-stage illustration from her book series Willow Buds and shows how to add variation, contrast, and a tactile quality to trees and grass, water, and the sky. These lessons are useful whether you're working with traditional media like the watercolors Mary Jane uses in this course, or digital formats like Adobe Illustrator and Photoshop.

Mary Jane uses the following materials in this course: