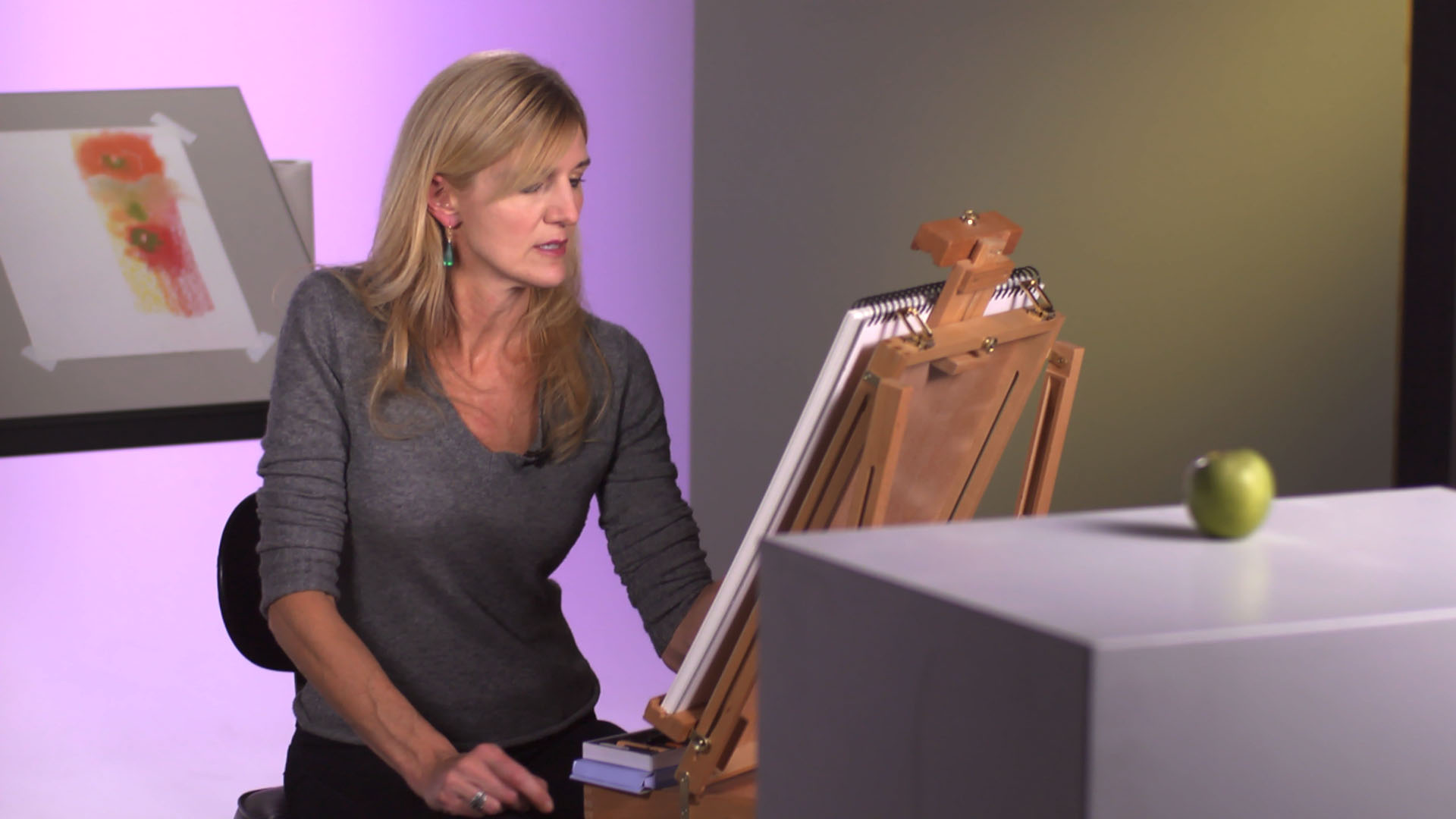 9/4/2013
Take a look over the shoulder of an artist at work. Mary Jane Begin, an award-winning illustrator and Rhode Island School of Design professor, sits down at the drawing board and explains how complementary colors—colors on opposite sides of the color wheel—can make your art, illustrations, and designs more compelling and vibrant. Learn how to layer colors of different hues and translucencies, play with light and shadow, and subtract color to create a sense of form. Plus, learn to neutralize a color's intensity simply by mixing it with its complement. Mary Jane illustrates these concepts through pastel on paper, but they can be applied to all types of media including digital endeavors.

Mary Jane uses the following materials in this course:

- I'd like to show you how complimentary colors can make an image more interesting and vibrant. Let's take a look at this still life of an apple. We'll start with this ground. Typically I like to use a tonal ground rather than working on white because the tone actually helps the colors connect. It creates a kind of family of colors and this particular tone I chose because the apple is green. And this tone it has a sort of red/brown quality to it, so those are complimentary colors on the color wheel. They're opposite each other and therefore have the most reaction, they're not related at at all, so the tend to vibrate next to each other and on top of each other.

But I don't really like the tone of this because it's too brown, I want to kick it up. So, I'm going to kick it up a notch or two by adding some red pastel. And maybe some orange pastel. And the reason why I'm doing that is I'm trying to increase the vibrancy of the color of the apple so it looks more delicious, so it looks like the apple that I'm looking at over there. So, I'll start with some red, I'll add a little orange. Again it's a complimentary color to green because there's red in it.

Red and green are compliments. Now, this color's all sitting on the surface, so in order for this not to just blow away, I have to actually press it into the paper, so I'm using my fingers as a kind of smudge tool. And I'm pushing it into the surface of the paper to make this ground. Now, I don't know how big I want to draw the apple, but I'm just going to go out a little bit further. So that the surface is mostly this red color. And, the red and the green also act as neutralizers, which is a kind of interesting thing.

If you put red on top of green, and they're both transparent, what happens is the red, being the opposite of green, will neutralize the green, and vice-versa. So, that's where the color neutralizes where you want the vibration or reaction is when you put an opaque version of a color, like an opaque green on top of a transparent red. Suddenly you have that pop because the green color is reacting to the red and because you can't see the red underneath, they're not neutralizing each other. One is reacting to the other and it's jumping out visually in space.

Okay, so this is a pretty good ground tone color. Okay. Now I'll start to draw the apple that I'm looking at. And I'm going to be conscious as I draw this apple of the light that's on the apple because that will help me know where the most bright green will exist and where the sort of neutral greens will exist. And the neutral greens are mostly in the shadow zone as you look at this on the apple.

But it's also actually a little bit in the shadow of the white on the table surface because the white is actually reflecting some of the green of the apple. When you create shadows of objects, typically that shadow color is made up of some of the color of the object itself. Can't just make the shadow purple or blue or green arbitrarily. It's actually related to the object. Now, I'm just sketching this out fairly quickly. But I'm going to do another thing that might be interesting to see, which is I'm going to subtract color off of the surface, it's called subtractive color.

It's where you're pulling color off a surface to try to create a sense of light in a form. And I actually took a bite out of this apple, not because I was hungry, but because I thought it'd look cool. There's actually more contrast in one side of it, so it doesn't look too smooth or symmetrical. So I'm sketching that out right now. And I'm drawing this a little bit darker than I normally would simply because I'm trying to make sure I can see it on this darker tone of reddish-brown color.

Okay, so I think I see what I have here pretty well. I'm going to take this eraser and normally I would have something maybe with a little sharper point, but this has a little point on it. I'm first going to look for the highest light that I see, ad the highest light that I see is a highlight on this apple, and it's right sort of at the top. Now what I'm doing is I'm trying to figure out in this case the value of the colors. Where's my lightest light? Where's my darkest dark? So that I'm thinking value first and then I'll deal with the complimentary relationships.

I also see there's a little bit of light in this zone here where I bit it. And you can see I'm just pulling a little bit of the red tonal color off of the background. Now this white isn't as white as it is over there, but I'll get there. This is just like I said, it's kind of a guide. And then the apple is actually sitting on a white surface, so I'll pull that off, too. I'm going to take a little bit of this red down on the left side of the apple because that color is a little more vibrantly green, so I don't want too much red reacting to that green and potentially neutralizing it.

But in the shadow zone on the right, I absolutely want that red to exist because it's going to work with the green. I'm going to mix them together with my finger. I'll show you that in a second. Okay, so I'm pulling this light off just a little bit. Now I'm going to pull a lot of the light where I see the table. And the table ends about mid-apple, at least from the angle I'm looking at it. So I'm really going to try to get most of this color off. And I'm going to leave the red where the shadow is, that ellipse on the backside of the apple.

I'm going to leave that there so that that shadow is already in place when I go to add more color to it. That shape is defined. I'm composing the picture as well with color because I'm trying to figure out what is the shape of that shadow, what's the shape of the apple. I'm looking at the shapes as part of the issue of color because colors always exist as shapes in an image. They're not just defining the form or talking about the content and defining the compositions.

So, I'm trying to think about that as I look at this image. And then shortly I will add the green, and you'll get to see the kind of reaction of the green to the red. And what I'll do is I'll neutralize it, and I'll also use it to make vibrancies. So you can see it for yourself. Even though that table has a hard edge on it, I don't really want to do that. I'm just gonna softly pull the color off so it sort of bleeds from a hard edge of light at the top to a softer edge at the back here on the bottom of the picture.

So this is really right now just a tonal image. There's color here, but it's more about value than it is right now about color reaction. Because nothing much is reacting here at the moment.