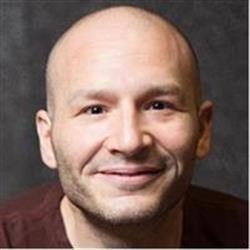 With deep experience in technology, education, and visual effects as a VFX technical director and supervisor on Academy Award-winning projects, VFX producer, and education program creator for world-renowned schools, David has gathered expert knowledge to assemble a platform to bring his passions and experiences together. His goal is to transform human communications toward a more compelling, spiritual, and controllable future for learners and creators everywhere—empowering all in digital content creation using the latest technologies combined with the best pedagogic and metacognitive methods.

In 2007, David was a key member of the trailblazing creature team at Framestore on The Golden Compass. Impressing the industry with state-of-the-art animated CGI polar bears, the movie went on to win the Academy Award for Best Visual Effects. Under Christopher Nolan's direction, David created the virtual Batman cape and wing for The Dark Knight, which is ranked as one of the best movies of all time on IMDB, as well as one of the highest-grossing films of all time, with over $1 billion in revenue worldwide. Feuillatre also collaborated with Sony Pictures Imageworks on franchised animated movies and with Technicolor MPC on award-winning films such as Life of Pi and Man of Steel. In 2009, David joined Weta Digital, and went on to pioneer CGI character technologies on James Cameron's Avatar—still the highest-grossing film of all time—foreseeing the emerging virtualization of film production led by James Cameron.

For the past eight years, David has been teaching his skills along the road. He's taught in many world-renowned schools such as ISART Digital—a top video games school in France—ESRA International Film School, and within studios creating character FX training programs and videos for Sony Pictures Imageworks.

In 2012 David was a mentor in the SIGGRAPH S3 Mentor Me program, and a reviewer for the SIGGRAPH Student Services reel, resume and portfolio review (S3R3). David holds a faculty position at Think Tank Training Centre in Vancouver, where he teaches the production curriculum, meditation in the life skills program, as well as workshops on the specialties: creature deformations, character FX, cloth and hair simulation. He's also an instructor for Institut Artline, the first online-based French computer graphics school, and Cineworks, an indie-film production organization in Vancouver.